While there may be as many as one billion domestic dogs in the world today, estimates of the global population of grey wolves (from whom domestic dogs evolved) put the number at a paltry 200,000-250,000. Once, there were an estimated 2 million wolves in North America alone, but human-wolf conflict and hatred of wolves has led to them being persecuted by humans. From the 1600s to seventy years ago, those who wanted to eradicate wolves dominated wolf policy, and wolves were hunted out of most of Central Europe and the lower 48 states of the United States of America (USA), with only small relict populations left in northern Minnesota and Michigan. The 1950s through the 1980s were the low point for wolf populations in Europe. In 1984, in an article entitled “The big bad wolf?,” Stephen Mills reported less than 1,000 wolves in Western and Northern Europe. But, as attitudes to carnivores began to change, the number of people supporting wolves grew, leading to increased advocacy on their behalf.

Wolf populations have now recovered to around 12,000 wolves in Western and Eastern Europe (excluding Russia, Ukraine, and Belarus). However, wolf recovery is again under threat as the political pendulum is swinging back to support wolf hunting (eradication?) in Europe and many of the lower 48 states in the USA. There were an estimated 7,500 wolves in the lower 48 states in 2020, but legal fights to keep wolves listed as endangered have failed, and individual states are now free to manage their wolf populations as they see fit. Idaho has announced an intention to kill 90% of their 1,000 wolves while Wyoming, Montana, and Wisconsin expanded their wolf hunts.

In Europe, there are now several thousand wolves on the Iberian Peninsula and another two thousand in Italy. France has around 589 wolves while Germany has 200, and there are now even a few wolves in the Netherlands. These wolves have prompted agricultural interests to put forward resolutions in the European Parliament calling for wolf control even though the Environmental committee claims that the issue is outside the brief of the Agriculture committee. However, the political conflict over wolves is most intense in Norway, even though Norway holds fewer than 100 wolves in a country with 5.4 million people spread over 385,000 square kilometers.

Norway seems to encapsulate “Red Riding Hood” fears more than any other country in Europe. Back in 1982, when there were probably no more than 18 wolves in all of Norway, a solitary wolf was accused of savaging 140 sheep near the village of Vegarshei, 150 kilometers southwest of Oslo. The presence of the wolf created an atmosphere of fear and fascination. The fears drove local farmers to persuade the government to amend wolf protection regulations and place a $3,000 bounty on the wolf’s head. The combined focus on fear and fascination spawned a tourist boom thriving on wolf souvenirs. Conservationists argued that the government’s actions disregarded the 1979 Berne Convention, which Norway had signed. Despite their arguments, the Vegarshei wolf was finally cornered and shot in January 1984. The wolf’s corpse then became the centerpiece for an extraordinary display. The local hunter poured champagne over the corpse in his living room in front of an array of journalists and then took the corpse to the local village school, a local older adults’ home, and finally to the steps of parliament in Oslo. But this display did nothing to cool local hysteria about wolves. The uproar eventually spread to Sweden, where a lone wolf roamed the Swedish peninsula until it was shot with a tranquilizer dart near Malmo.

Today, the political conflict over wolves in Norway again overwhelms any calm analysis of how best to manage the population of around 100 wolves in Norway with a further few hundred in neighboring Sweden. Wolves in Norway cause far less damage than other carnivores like bears and wolverines, but the wolf has become a symbol of the rural-urban divide in the country. Although appropriate management of human-wildlife conflict strategies is essential, wolf management must also address the challenges caused by the deep-rooted social conflicts where predator conservation is concerned. Simply introducing better technology to manage wolf depredation on livestock will not be sufficient. Instead, the different social values held by rural and urban communities must be heard and effectively engaged. In an analysis by WWF and UNEP, the authors argue that the Norwegian conflict over wolves provides essential lessons for similar rural-urban disputes in other European countries. They conclude that the Norwegian conflict offers a cautionary tale that human-wildlife conflict “cannot be resolved by the conservation sector alone.” 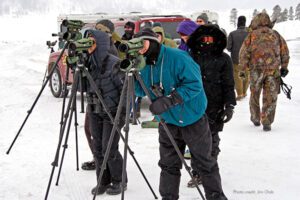 Visitors on a wolf-watching tour in Yellowstone National Park.

After twenty years of managing wolf recovery in the Northern Rockies in the USA, wolf advocates are dismayed by recent policy changes targeting wolves. More than 500 wolves (one quarter to one-third of the total wolf population in the area) have been killed in Montana, Idaho, and Wyoming in recent months. These deaths include 24 of approximately 125 wolves that live in Yellowstone National Park but were shot when they roamed outside the park boundaries. Five of the 24 wolves were radio-collared, and their deaths have disrupted ongoing wolf biology and behavior studies. It should be noted that Yellowstone National Park has experienced an increase in persons visiting the park to view wolves, bringing added revenue to the park and the surrounding communities.

Meanwhile, in Norway, the government has abandoned its plan to grant hunters permits to shoot 51 wolves (out of an estimated total of 80 wolves in the entire country) after animal advocates were granted a court injunction to halt the hunt.