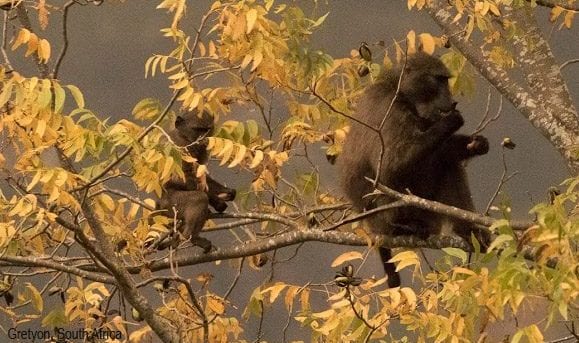 Posted at 06:50h By Andrew Rowan, DPhil
The chacma baboon (Papio ursinus) is one of the largest of all monkeys and is a relatively common sight in the Cape Province in South Africa. In fact, the 500 or so baboons living on the mountain slopes of the Cape Peninsula (Cape Town, South Africa) are now the focus of serious human-wildlife conflict concerns. The baboons have learned that food and people are closely linked. Individual baboons have learned to open car doors parked in the Cape Point Nature Reserve and baboon troops now get into houses and raid refrigerators in Cape Town and its suburbs. However, the human-baboon conflict is widespread in South Africa and the following is a description of how the Greyton community is resolving this conflict.
The Baboon Monitoring Team, established in Greyton in August of 2017, is an effort to prevent significant human-baboon conflict before it became a real problem for both the Greyton residents and the baboons. Andrew White, Chair of the Greyton Conservation Society, has provided information on the number of times a month that baboons were observed in Greyton village since the beginning of 2017. During 2017, baboons were observed in the village on average 8.7 times a month with a peak in late summer when the trees in the village were bearing fruit. In 2018, there were an average of 6.4 incursions per month but, if June were excluded from the data, the average would fall to 5 incursions per month, and there were hardly any incursions during the second half of 2018 (average of 3 incursions a month compared to 6.4 in 2017). The chart below shows the data for 2017 and 2018 (data for January and December 2018 are missing). 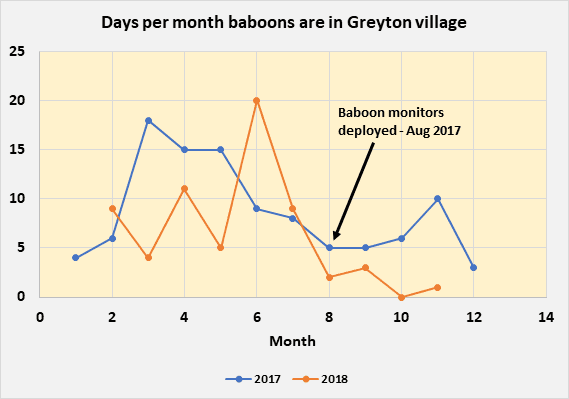 While the data are encouraging, the testimonials provided by various residents reinforce the positive data trends.
Resident A gave the following testimonial.
“During the remainder of 2016 and through the first half of 2017, there was frequent baboon activity in our area, usually a lone male, but sometimes the full troop. Often, we would have the lone male move through our garden on several days in a row, either feeding on Eugenia berries and Chinese guavas, or en route elsewhere. We had several incidents of our dog interacting in one way or another with the baboons.”
“Since the commencement of the baboon monitor program around mid-2017, there has been a remarkable change, with only very few incidents of baboons in our own or neighboring gardens. In the last few months, there have been none at all, as far as we are aware. There are occasions when we hear baboons up the valley and earlier last year there was quite a lot of activity along the river below Vlei Street, but, except for a few isolated cases, the monitors prevented them from entering the village area.”
“We feel that the baboon monitor program has been extremely effective in keeping the baboons out of the village and in preventing the situation as it was from escalating into a difficult to resolve confrontation between residents and baboons”.
Resident B also lived on Vlei Street (which is an entry point for the baboons coming from the Nature Reserve) and she noted that, in the past six months, she has had no visits or baboon sightings, compared to 2017, when visits and sightings were common. She also noted that she has seen the devastation baboons can cause to property in other communities in the area and urged that the Monitors be continued to prevent such damage from occurring in Greyton.
Resident C had his thatched roof damaged by baboons and subsequently signed up for the monitor program. He stated, “Since the baboon monitoring program was introduced, some two years ago, sightings of baboons in the village have been negligible. An extremely valuable service that deserves our support.”
The reaction of some of the Greyton residents to this more measured approach to human-baboon conflict recalls what happened on Fire Island, on Long Island, New York. Fire Island is an upscale vacation spot at the Eastern end of Long Island, but its harmony was being disturbed by a major internal dispute over what to do about the growing number of white-tailed deer, who were in the habit of eating shrubs and flowers in community gardens. The community was divided into passionate deer advocates and just as passionate advocates of culling the deer to reduce their impact on gardens. In the end, the community agreed to start a contraception project to control and reduce the deer population. This project successfully halved the deer population over a period of a decade or so but the political upheaval died down almost immediately (despite the fact that the deer population had hardly changed in the early days of the project). The community calmed down when the authorities agreed to “do something” even though the benefits were not actually realized for several years.
Print page