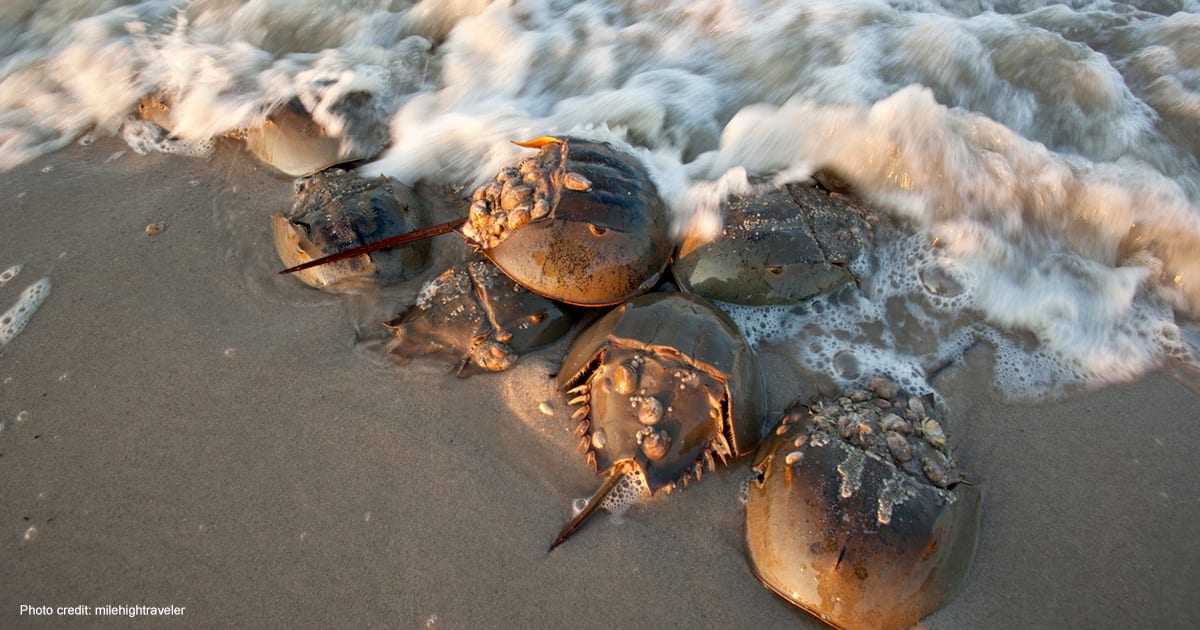 After 15 months of looking at the four walls of our house and now fully vaccinated, we were eager to be anywhere but there. So, for our first foray, we travelled 2 hours to Slaughter Beach, a small Delaware community on the shores of the Delaware Bay. We, however, were not the only ones to flock to the beach. Thousands of horseshoe crabs had come ashore on Slaughter Beach; it was mating season. 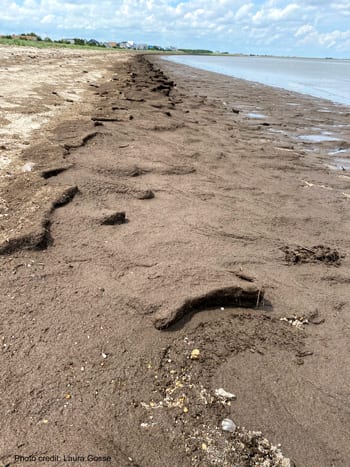 We were in awe of these creatures who are true living fossils and would search up facts on our phones about them as we strolled among them. The species (not really a crab but more closely related to scorpions and spiders) has been around for millions of years and had been coming out of the deep ocean to spawn on the world’s beaches for hundreds of millions of years ago (before the dinosaurs who were around between 245 and 66 million years ago). Mind-blowing!

The horseshoe crab (Limulus polyphemus is the official name of the Delaware Bay visitor) gets its name from the fact that its shell (or exoskeleton) is shaped a bit like a horseshoe. While ominous looking, its hard tail (or telson) is not a weapon nor is it poisonous, but rather it helps the crab to right itself if flipped by a wave. During our daily walks, we helped many a horseshoe crab to flip back over (by gently turning them); some days it felt like a full-time job.

The horseshoe crab spends most of its life in the deep ocean foraging for food on the ocean bottom.  But every spring, when the tide is high, hundreds of thousands of adults (from 200,000 to 400,000) emerge onto the beaches of Delaware Bay to spawn.  Each female will deposit around 4,000 eggs at a time on the beach and may do this up to five times in a night. There is something about the soft, muddy sands of Slaughter Beach that makes an ideal breeding ground.  A single female can lay up to an astonishing 100,000 eggs in a mating season.  The male then fertilizes the eggs and both adults travel back to the deep ocean when the mating season (a few weeks) is over. 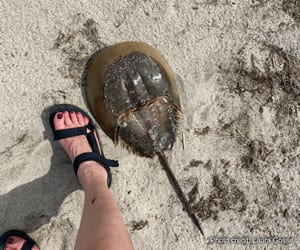 Size of a female horseshoe crab as compared with the author’s size 10 shoe.

While the spawning process is an extraordinary spectacle, it turns out that very few of the 100,000 eggs laid by a single female make it to adulthood. Most of the eggs end up as food for migrating birds and other animals. For example, the Red Knot, a sandpiper that annually migrates over 9,000 miles one way from the tip of South America to the Arctic Circle in Canada, takes advantage of horseshoe crab eggs. In fact, without horseshoe crab eggs, the Red Knot might not be able to survive as a species.  When the migrating bird lands in Delaware Bay to refuel, it is half the weight it was when it set off from South America.

I was surprised to learn that the horseshoe crab has also been instrumental in reducing the use of rabbits in laboratory testing. Rabbits have been a mainstay in the quality control of injectable drugs and in making sure that such solutions do not have bacterial contaminants. It had been known for some time that blood (hemolymph) from a horseshoe crab could also be used to detect these contaminants. In the late 1960s, a scientist from Johns Hopkins approached the FDA to see if he could use horseshoe crab blood to test for bacterial contaminants. The FDA approved this test (known as the LAL test for Limulus Ameboid Lysate) in 1983.

Understandably, there have been concerns that the use of horseshoe crabs to produce the material for the LAL test might have negative consequences on the population. 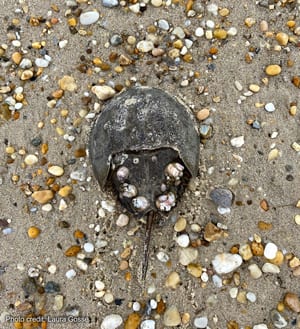 While the crabs are returned to the ocean after a third of their blood is removed, research indicates that 10-15% of the bled crabs do not survive their return. Fortunately, the LAL test is now being replaced by another test (known as the MAT test) using human blood developed by another Johns Hopkins scientist, Dr. Thomas Hartung. Dr. Hartung said, “We not only spare the horseshoe crab population and replace the hundreds of thousands of rabbits used every year in laboratories around the world, the MAT test is also a better detector of bacterial contamination.” Win-win-win!

My week at the beach provided me the needed respite from pandemic isolation and gave me the greatest vacation souvenir – an education and appreciation of these wondrous, gentle and pre-historic animals.

Laura Gosse is a member of the WellBeing International Global Team.