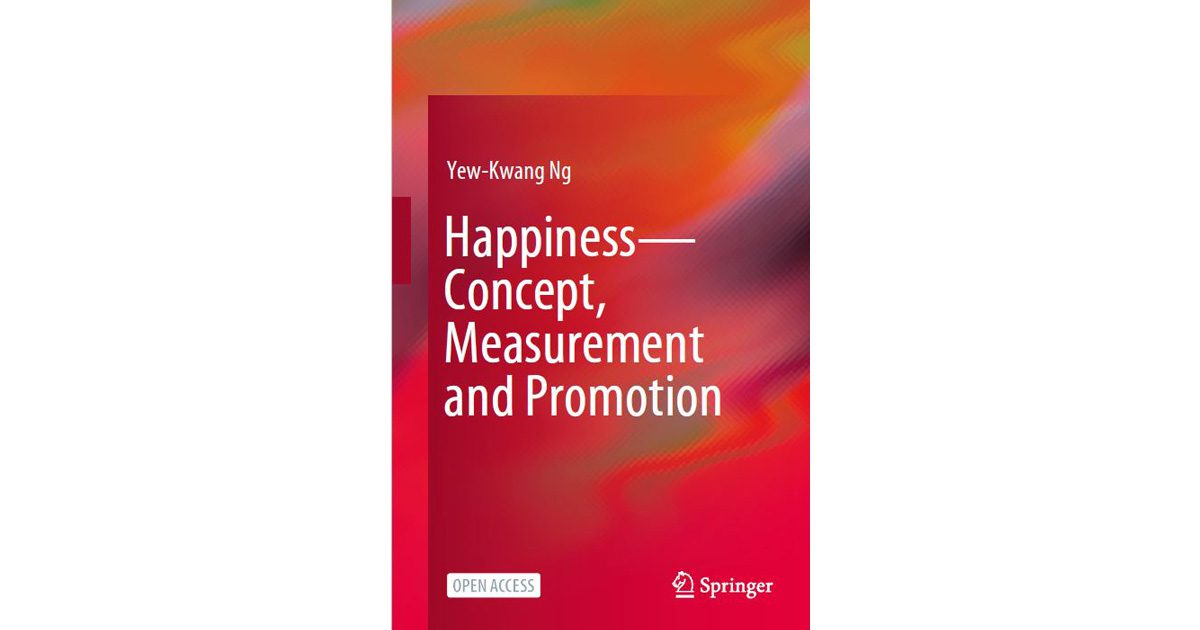 The April 2022 Tales of WellBeing included a review of a book on human happiness written by social psychologist and professional ethicist Dr. Jonathan Haidt. Haidt looked at happiness and how it might be achieved from the perspective of positive psychology. Professor Ng’s new (open access) book on human happiness approaches the topic from an economist’s perspective. Nevertheless, both books discuss how happiness is measured and how an individual might increase one’s happiness, despite the finding that one’s genetic make-up also influences a person’s happiness level.

Professor Ng introduces several additional observations not found in Haidt’s book. For example, he notes that one’s level of happiness changes over a person’s lifespan. Research indicates that personal happiness reaches a low point in one’s thirties and then steadily rises as one ages until disease and disability take their toll at the end of life. It is unclear why happiness should follow such a u-shaped trajectory. However, Ng speculates that the 30-s are a challenging period for most people (who will often be starting careers and perhaps marriage and may have aging parents and possibly young children needing care). Research also indicates that depression and suicide rates are highest in the fourth decade of life (i.e, the incidence curve for these outcomes is an inverted “u” or mountain-shaped in Ng’s description).

Ng discusses the methodological fashions of academic economists over time. For example, economists in the nineteenth century used many subjective terms (e.g., satisfaction, happiness, pleasure, and pain). However, in the early twentieth century, economists largely rejected subjective terminology and concepts in favor of objective metrics. The resulting methodological changes in economics were analogous to similar changes in behavioral science methods at around the same time. Led by Watson and later Skinner, behaviorists rejected the study of “inner states” to focus on studies of only observable behaviors. Both fields aspired to be more “scientific” by focusing on objective measures. Ng acknowledges the positive outcomes for economics research produced by the focus on objective metrics, he argues that subjective well-being or “happiness is the ultimate objective of most, if not all people.” If having more money does not substantially increase happiness, then maybe more money is not particularly useful. Therefore, Easterlin’s 1974 paper arguing that having more money (above a certain minimal amount) did not appear to increase overall happiness has had a major impact on happiness studies and policies.

Ng also steps boldly into controversial areas and discusses what he describes as the East-Asian Happiness Gap. “While East Asia (with the major exception of Japan in the last three decades) has done extremely well economically, it has not done well at all in terms of the ultimate objective of life–happiness.”  In 1998, one study reported that China, Japan and Korea scored at the bottom of the happiness scale with the Northern Europeans at the top, followed by the English-speaking countries and then the Latin American countries.  Ng notes that Latin nations tend to view pleasant emotions as desirable whereas Confucian cultures tend to be more accepting of unpleasant emotions and see neutrality – neither satisfied nor dissatisfied – as the ideal life satisfaction state.  Also, East-Asian culture is very competitive and may be too focused on appearance and not losing face rather than on how people may be feeling.

Finally, Professor Ng also includes two chapters (one on Environmentally Responsibility and Happiness and one on Animal Welfare: Beyond Human Happiness) in the book.  Thus, one could argue that his book encapsulates the importance of ensuring that one considers all three elements of the People, Animals Environment triad when pursuing truly sustainable options.  In the Animal Welfare chapter, he notes three basic questions in economics: What (to produce)? How? For whom?  He argues there are also three basic questions for welfare biology: “Which (species are capable of welfare)? Whether (their welfare is positive or negative)? How (to increase their welfare)?  He suggests that the ability to feel must have evolved and that it must, therefore, have survival value and that sentience (the ability to feel) leads to learning, behavioral flexibility, and evolutionary fitness.

If the review of the Haidt book prompted you to buy and read it, I would strongly suggest you obtain a copy of the Ng book as well. The two books provide complementary views of the same topic – Happiness and how we might increase it.  Furthermore, the PDF of Professor Ng’s book may be downloaded for free (although that probably would not increase the reader’s happiness since money is not that important for happiness!).