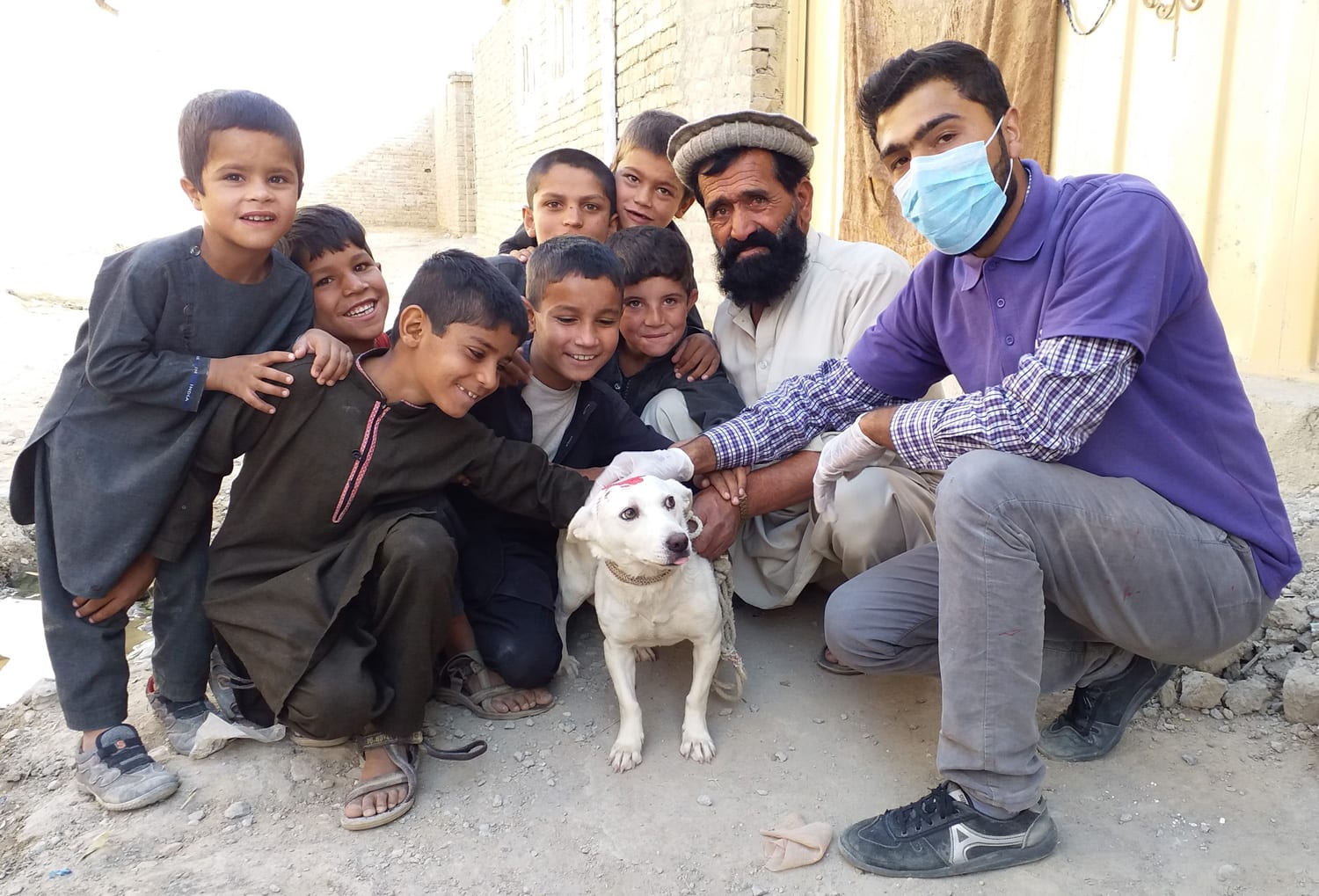 Mayhew Afghanistan has been selected as the Consortium Implementing Partner (CIP) for Kabul. 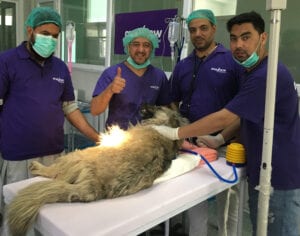 Mayhew Afghanistan (MA) is an outgrowth of the Mayhew in London, an animal shelter initially established in 1886. For 120 years, it was primarily a local shelter serving communities in North London, but in 2007, Caroline Yates was appointed the CEO of Mayhew and began an international program. Mayhew International became a strategic arm of Mayhew’s in 2012 and currently has branches in Afghanistan and Georgia.

In 2015, Mayhew International developed a proposal to conduct dog vaccination and sterilization in Kabul, Afghanistan, in part because of the hire of Dr. Abdul-Jalil Mohammadzai (“Dr. Mo”), an award-winning veterinarian from Kabul University. Mayhew Afghanistan (MA) was formally registered in 2016 as the local NGO overseeing the dog project in Kabul. Dr. Mo serves as the Country Director and principal project manager of MA. 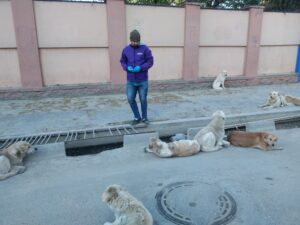 Mayhew launched the dog project with a simple survey to count street dogs in Kabul in 2015. The survey was an essential first step to establish the size of the challenge they were taking on. The first survey indicated at least 15,000 street dogs in the city. Still, MA assumed the total would be approximately double because no street dog count detects all the dogs (street dog detection rates are usually from 30-50% in a simple street survey). MA next had to persuade the Kabul Municipality to stop culling 15-20,000 street dogs a year. [Note that the culling of around half to two-thirds of the dog population annually had no noticeable effect on the total number of street dogs.]

MA succeeded in persuading the Municipality to stop the dog cull in January of 2017. They trained a team of dog catchers/vaccinators (selected from among the municipal employees who had been engaged in the dog control program) to catch and handle the street dogs humanely for vaccination and raised funds to launch the project.

In August 2017, the rabies vaccination program started. By the end of 2017, 3,487 dogs had been vaccinated. In 2018, another 22,642 dogs were vaccinated, of which 6,624 were homed (“pet”) dogs vaccinated during a door-to-door campaign. By the end of the first vaccination cycle in 2018, MA estimated they vaccinated 77% of the dogs in the city. In 2019, MA vaccinated 27,354 dogs, of which 3,088 were homed dogs. It was estimated that almost 80% of the dogs in the city had been vaccinated after the second cycle. Table 1 indicates, there has been a substantial fall in human rabies cases from an average of 37 cases a year at the beginning of the decade (2010-2012) to zero at the end. The number of reported dog bites in 12 months (recorded from April through March) has also fallen during the vaccination and sterilization project.

MA started the street dog sterilization program in 2019 to run concurrently alongside the rabies vaccination program. In two years, MA has sterilized 20,000 dogs (approximately half of the total dog population in the city – See Table 1). The pandemic slowed down the sterilization project because of lockdowns in the city. However, the Kabul Municipality decided the project was an essential service, and staff could resume the catching and the sterilizing of street dogs.  Normal operations were resumed in August 2020.

On August 15, 2021, when the Taliban reached Kabul, both the rabies vaccination and sterilization programs were suspended.  On September 12, 2021, following requests from the Kabul Municipality and the relevant permissions from the new authorities, the programs were resumed, albeit at reduced capacity.  From September 21, the team has sterilized a further 540 dogs. 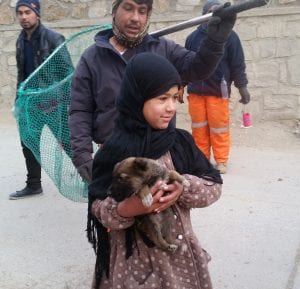 Girl and Puppy in front of a Dogcatcher in Kabul. (Photo by Mayhew Afghanistan)

The dog sterilization project requires the development of sufficient veterinary capacity and expertise to sustain the program. MA succeeded in persuading Kabul University to let them use their veterinary surgery facilities for the project and has been mentoring young graduates from veterinary schools in the country. They now have a skilled team of veterinarians experienced in sterilization surgeries and canine care. MA is particularly proud of the opportunities it has afforded to young veterinarians under the tutelage of Dr. Mo. MA expects these young professionals will, in time, end up starting and running their clinics and veterinary practices in Afghanistan.

MA is also tracking human behavior changes. Perhaps the most dramatic change has been the public attitude toward the street dog catching and handling teams. During the years when dog culling was happening, these municipal workers were abused and shunned. Now, they are being viewed as trusted sources of information on dog behavior and management, and a few street dogs have been adopted into homes by members of the MA team.

The Kabul dog vaccination and sterilization project has been doing so well that the central government expressed an interest in expanding the program to other cities in Afghanistan. Dr. Mo was invited to be a member of the National Zoonosis and Rabies Control Program of the Ministry of Public Health. It is estimated that dealing with rabies and dog bites costs Afghanistan around $70 million a year. The vaccination and sterilization programs in Kabul have been funded at less than 1% of that figure.  There are clear economic and public health benefits to expanding the dog sterilization and vaccination program, not to mention the well-being benefits for the dogs.

As MA continues to track progress and document the impact of the dog vaccination and sterilization program, it is hoped that the MA project will become a model for other countries to emulate, leading to improved well-being for people and animals.