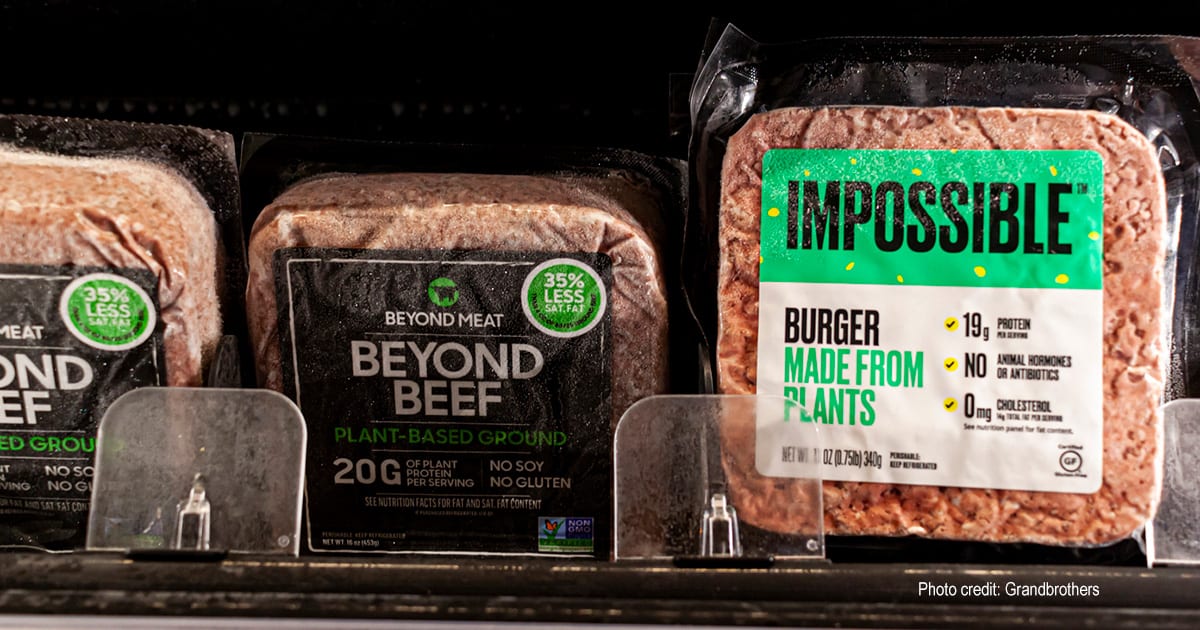 It is now commonplace for any new report on global sustainability to recommend that people should eat fewer animal products to help address climate change, biodiversity losses, personal health and several other challenges facing the world today. The Dasgupta Review (see related article in this newsletter) is the most recent major report to recommend that humans eat lower on the food chain. However, by all reports and analyses, consumption of animal products has been rising relentlessly over the last sixty years. In 1961, the world consumed 71 million metric tons of meat. By 2018, consumption had risen to 341 million metric tons – almost a 5 – fold growth in just 57 years, a very short period in the history of humankind and, by comparison, the human population grew 1.5 – fold in that time period. Furthermore, the UN Food and Agriculture Organization (FAO) predicts that global meat consumption will double by 2050.

The rapid increase in meat consumption comes with a significant cost in environmental damage and biodiversity loss and is unsustainable. It is also unclear how the world could produce enough meat to further double consumption in the next thirty years. Almost 80% of the world’s agricultural land is already devoted to the production of dairy products and animal protein.

Fortunately, there are now signs of a dietary revolution emerging in the alternative protein sector. In the last ten years, new investments have poured into start-up companies that are manufacturing protein-rich foods (alternative meats and dairy products) with a much lower ecological footprint than the products now obtained from animals. The Good Food Institute notes in its 2021 review of investment in alternative proteins that this sector raised $3.1 billion in 2020. This increase is three times more investment dollars than in any previous year and is more than half the total investment funding ($5.9 billion) raised over the last decade.

Although Bill Gates and other investors (including major multi-nationals currently engaged in the production of animal proteins) are investing in alternative protein companies, this does not mean that they are necessarily doing so primarily to reduce meat consumption. The development of synthetic biology and its broad potential application to other industries may be at the root of their interest. And, as Lewis Bollard of Open Philanthropy’s Farm Animal Welfare program notes, plant-based proteins and alternative meats are still a lot more expensive than their animal-sourced competitors (see chart). Although various banks and food consultancies project that the global market for meat alternatives will increase to somewhere between $85 and $390 billion by 2030 but these figures are still only a fraction of the global meat market (approximately $1,200 billion in 2019). 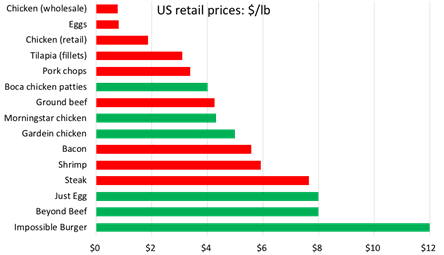 Animal products (in red) are cheaper than their plant-based (in green) competition.

Sources: Chart compiled by Lewis Bollard of Open Philanthropy. Meat and egg prices are national retail averages based on US Bureau of Labor Statistics data for August 2019, complied by the USDA’s Economic Research Service. For all other products, Bollard found the lowest priced option on Walmart.com, except for Beyond Beef (which is cheaper at Target), and Just Egg and the Impossible Burger (which are not available at Walmart.com).

A major challenge for the new alternative protein products is the very low cost of meat.  On a per pound basis, chicken is cheaper than peanuts.  Since 1950, the inflation-adjusted price of chicken has dropped from $4.64 to around $2 a pound.  Meanwhile, Morningstar and Gardein chicken strips cost between $4 and $5 a pound.

One reason why meat is so cheap is because meat production costs do not include such externalities as the pollution caused by the manure produced by farm animals or the costs of antibiotic resistance resulting from the use of antibiotic-laced feed additives for production animals.  For example, in the EU, food animals consume three-fifths of the total volume of antibiotics used annually.  As for farm animal manure, the 2 billion pounds of farm animal waste produced annually in the US is mostly spread untreated onto fields.  In contrast, human waste must be treated before it can be applied to fields.  If farm animal waste was similarly treated, it would cost the industry somewhere between $80-200 billion a year (the US meat industry earned around $220 billion in 2019).

We can expect the cost of alternative proteins to continue to fall as sales volumes increase and the technology advances. The huge drop in the price of solar power has been driven almost entirely by the increased volume of sales (see Swanson’s Law). The costs per installed watt have dropped 65% since 2010. As the volume of alternative proteins ramps up, their costs should also continue to fall.  If governments also begin to introduce policies to discourage the unsustainable production of meat (e.g., see this analysis of the growth in interest in alternative proteins in the Netherlands), then we could see alternative protein production follow the same trajectory as solar power – an increased uptake of both would produce substantial benefits in global sustainability and permit some restoration of biodiversity.