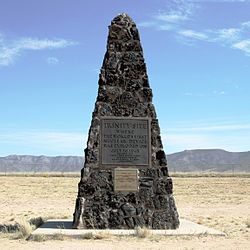 A few weeks ago, a few family members and I visited Trinity site in New Mexico. Trinity site is where the first atomic bomb was detonated in July 1945 and is only open to the public twice a year. Other than the black obelisk monument at ground zero, very little of that dramatic event is still visible to the human eye. The crater and trinitite created by the explosion were largely removed, and the site was recolonized by high desert vegetation. The pastoral nature of the site is in sharp contrast to the manifold legacies of the event, especially the quote by Robert Oppenheimer when he referenced the Hindu scripture, the Bhagavad-Gita, ‘Now I am become Death, the destroyer of worlds‘. Luckily, such apocalyptic endings have yet to be realized. Yet, the event does mark a turning point in humans’ role to modify the trajectory of our planet.

The Anthropocene has been proposed as the newest geologic epoch of the earth, reflecting the scales of human influence on the planet. The proposal of naming a new geologic period is being evaluated by various professional groups of geologists and earth scientists and has not yet been adopted. However, discussions around this proposal have highlighted the need to identify a starting point for this age of humans. Many suggest that the Anthropocene began in 1945, with the first atomic bomb detonation at Trinity site. Subsequent use of nuclear bombs and nuclear testing led to increased fallout in radioactive material, which has become part of the geologic record. This fallout is an indicator or ‘golden spike’ of this new period. Whether the name is adopted or not, we humans have altered our planet’s ecological and geological processes to degrees hardly imaginable during the first Earth Day some five decades ago.

My memories of participation in the first Earth Day on April 22, 1970, are few. I remember a large crowd marching and carrying flags and signs on a bright spring day to bring attention to water and air pollution issues in my hometown in Southwest Florida. I remember folks waving the ecology flag, green and white stripes, and a large Greek letter theta in a solid green field as it was patterned after the American flag. The theta letter was associated with the Greek word for death, indicating the magnitude of the threat to the environment. Other than a sophomoric call for collective action to end local pollution, I had little idea of the scope, complexity, and magnitude of the changes to our world that were about to unfold. 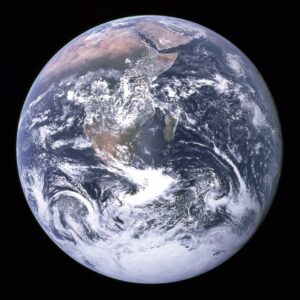 Perhaps one of my earliest conceptualizations of the earth as a system occurred in 1972 when as a student, I saw the famous ‘blue marble’ photograph taken by astronauts aboard Apollo 17. This image created many responses.  To some, this was a road map to conquer and build a global economy, to others it was a fragile planet suspended in space.  To me it was the first image of the biosphere, the solar powered ecosystem, powered by solar energy that that provides life support to us all.

As a scholar, over the past 40 years, I have read and contributed to the scientific literature documenting the unprecedented changes to our earth system. While ongoing climate change captures much of the headlines, humans have (directly and indirectly) terraformed the blue marble in ways unimaginable to me on the first Earth Day. During a period of the Anthropocene called the great acceleration, humans have globally altered biogeochemical cycles of carbon, nitrogen, and water. Extraction and combustion of fossil fuels during the industrial era have increased carbon dioxide and methane concentrations in the atmosphere by nearly 50%. We have doubled the amount of nitrogen removed from the atmosphere and ‘fixed’ to increase agricultural productivity. Synthetic chemicals, such as chlorofluorocarbons, have altered the ozone layer. Plastics and other compounds will remain a part of human footprints for millenia. About 40% of global net primary production (solar energy transformed into plant material) is appropriated by humans. Perhaps one of the most staggering is that the mass of human-produced materials (buildings, roads, etc.) now exceeds living biomass.

This year marks the 53rd Earth Day and the 77th year of the proposed Anthropocene epoch. We know much more than we did during the first Earth Day and better understand our planet’s social, ecological, and physical systems. Yet much of that understanding has documented unwanted changes to these systems rather than guiding future actions or helping overcome implementation barriers. The theme of Earth Day 2022 is to invest in our planet for a prosperous and sustainable future. Such investments should be in the form of new and novel experiments that allow us to learn our way into the future, rather than more studies or government programs. If the creation of the first atom bomb signaled the beginning of the earth’s trajectory in the Anthropocene, Earth Day should be our annual day to reflect on, adapt and transform that trajectory.

Dr. Lance Gunderson is a professor and the chair of the Department of Environmental Sciences, Emory University, Atlanta, Georgia, 30033