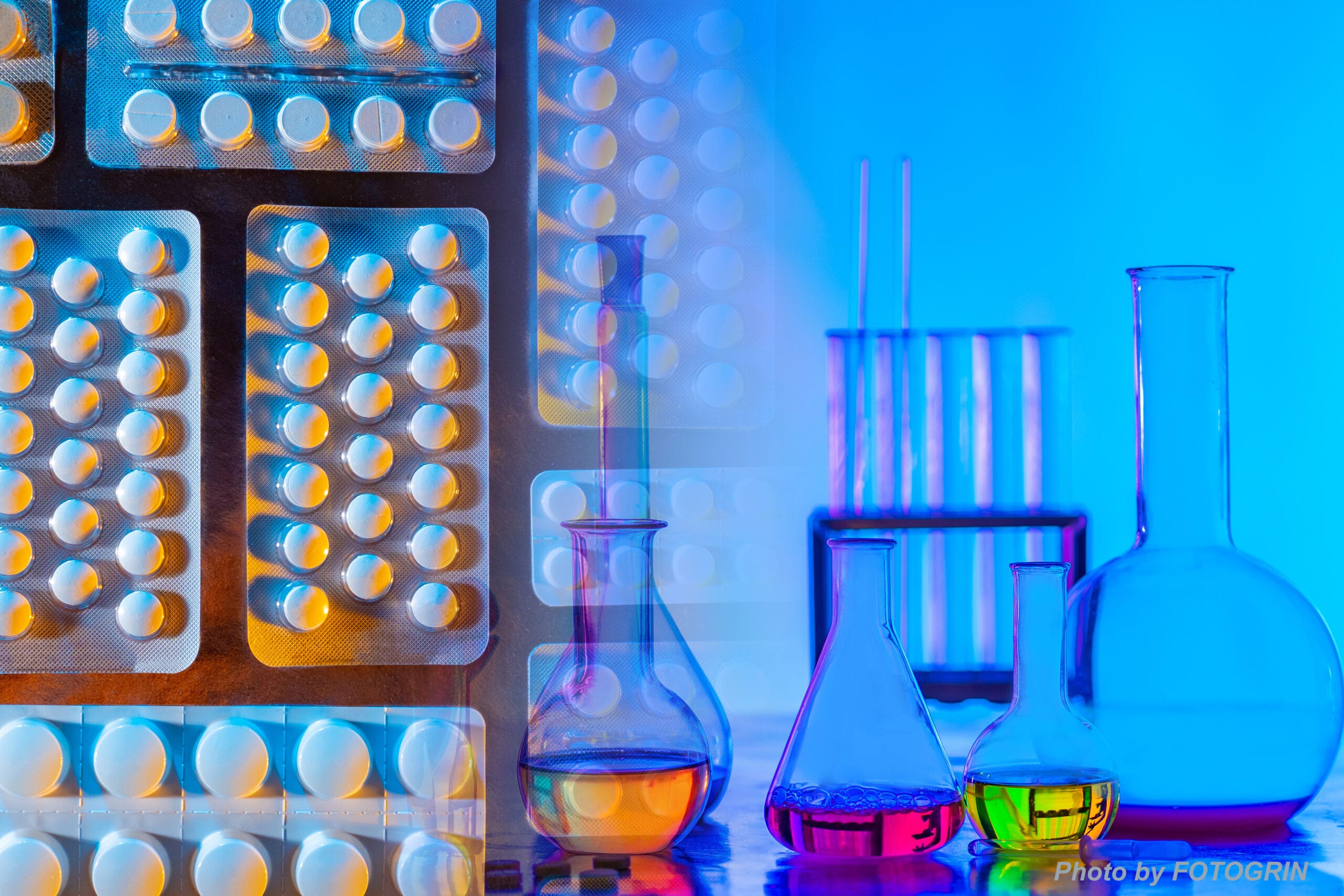 Over the years, the use of laboratory animals by drug companies and other commercial laboratories has elicited more than its share of criticism. In the late 1970s, animal advocates turned their attention to the testing of cosmetics and personal care products on animals, with particular attention to lethal dose testing in rats and eye irritancy testing in rabbits (see The Draize Campaign-A Summary, pages 94-97 in link). In 1980, a campaign against Revlon led to that company funding a research program at Rockefeller University to develop an alternative to eye irritancy testing on rabbits (producing the Neutral Red Test protocol, OECD Test Guideline 432, still widely used today.) Revlon’s initiative was followed by the cosmetic industry funding the establishment of the Johns Hopkins Center for Alternatives to Animal Testing (CAAT) in 1981. Forty years later, CAAT is still at the forefront of the debate on the use of laboratory animals and is now joined by numerous similar centers promoting alternatives in Europe, Asia and Brazil.

In recent years, animal advocates have pointed to the crisis in new drug development. This is due to the very high failure rate of new drugs when they finally reach the clinic (over 90% of new drug entities fail at this stage according to several studies). The drugs “fail” because they are either ineffective in humans (after being effective therapies for the target disease in animal subjects) or because they demonstrate unexpected toxicity in humans (after being shown to be safe in animal subjects). Today, there are also an increasing number of reports in the scientific literature criticizing the utility of animal models and several scientists have begun to call for better development and safety testing approaches that do not rely on animals. In a 2016 budget hearing (see statement at 33:47 of video) for the National Institutes of Health (NIH) before the US Senate, NIH Director Francis Collins predicted that, within 10 years, drugs would be developed and tested using human biochips that “will mostly replace animal testing for drug toxicity and environmental sensing, giving results that are more accurate, at lower cost and with higher throughput.” 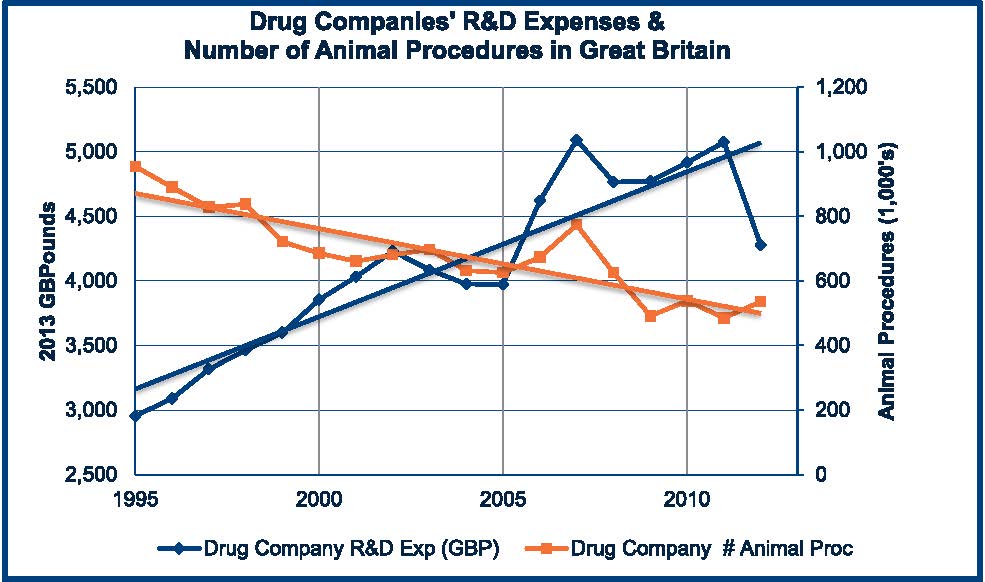 Indeed, many new technologies have been developed and implemented in the 21st century that show great promise, but some scientists argue that Collins’ prediction is mostly wishful thinking.  A recent paper, estimating that 100 million mice and rats are bred and housed every year in US laboratories, suggests that these nay-sayers might be correct. And yet, evidence from Great Britain (and also from the USA) paints a very different picture of a rapid decline in laboratory animal use by pharmaceutical companies despite an increase in pharmaceutical investment in research and development. For example, according to Dr. Emil Pfitzer, Vice President of Toxicology and Pathology at Hoffman-La Roche, the company’s laboratories in the USA reduced their use of laboratory animals by two-thirds (from one million a year to 300,000 a year) in the 1980s decade even though there was no change in the number of new drugs being developed. In Great Britain in 1975, commercial laboratories (mostly pharmaceutical and chemical) made up about 70% of laboratory animal use (estimated at around 4.2 million animals). Today, commercial laboratories use less than one-quarter of all laboratory animals in Britain while laboratory animal use by universities and medical schools has almost tripled. The two charts show the level of annual investment in research and development (in constant 2013 pounds) compared to the annual number of animal procedures reported by each group of research laboratories. [Note: The recording of animal procedures changed in 2014 to comply with EU reporting requirements and it is no longer possible to track just pharmaceutical animal use using the annual reports from the Home Office.] 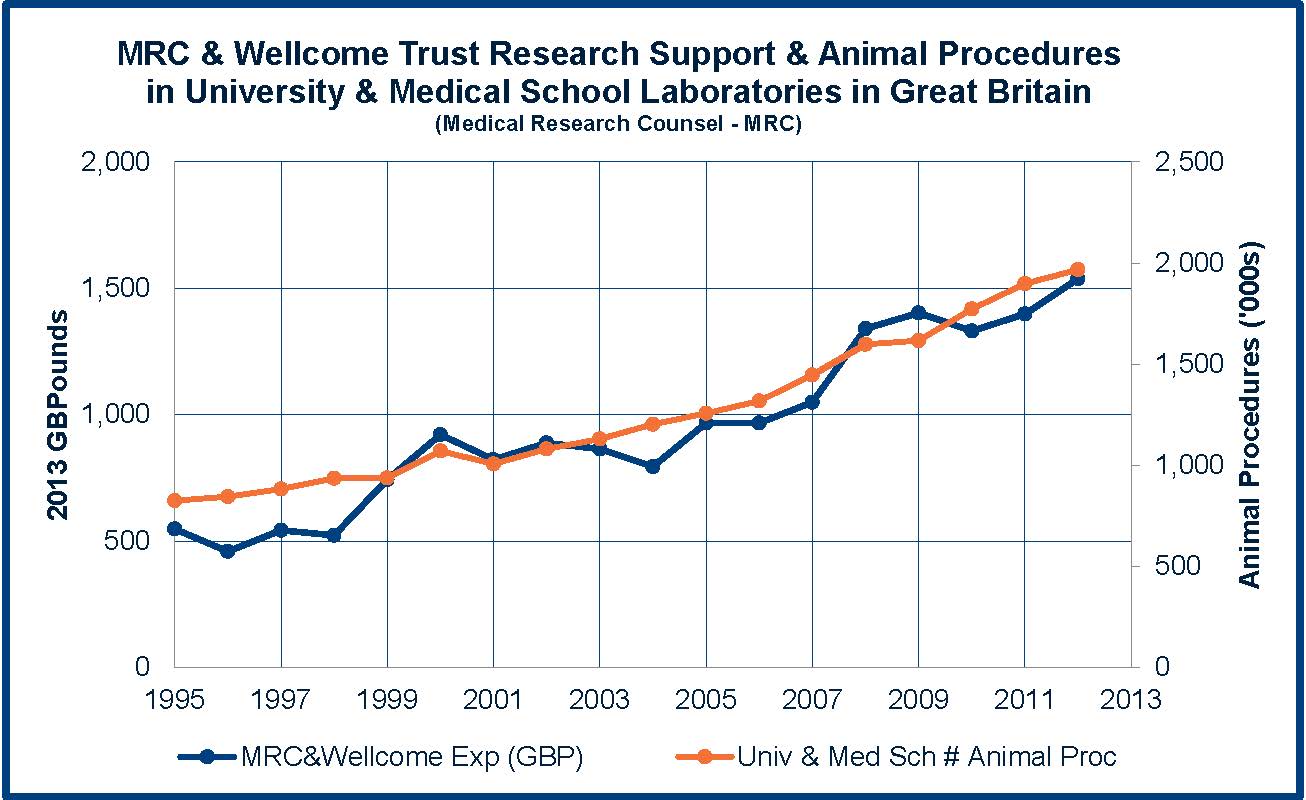 While the use of laboratory animals in university and medical school laboratories in Great Britain closely tracks the annual research support (the Wellcome Trust and the Medical Research Council (MRC) provide the majority of the public funding of academic research in Britain), the use of animals by pharmaceutical laboratories follows an inverse relationship since 1995. In fact, by 2025, if the trends continue, pharmaceutical laboratories will be conducting research and testing on only around 150,000 animals (compared to over 4 million in 1975!).

In 2019, the Association of the British Pharmaceutical Industry (ABPI) sent out a press release calling attention to these trends. Dr. Jennifer Harris of the ABPI noted of the 2018 report on laboratory animal use, “Pharmaceutical companies are increasingly using computer models or cell culture to replace the animals they use in research. Today’s figures show we’re making good progress towards our goal of ultimately reducing the number we use.”  The pharmaceutical companies generally prefer not to call attention to their use of laboratory animals and their use of alternatives or NAMs (this abbreviation is being used to refer to either Non-Animal Methods or New Approach Methods). But the animal use trends in pharmaceutical laboratories offer the clearest indication that biomedical research and testing is changing and changing dramatically. Animal models are no longer the central feature of drug development and testing that they were from 1950 to 1990. Perhaps Francis Collins’ prediction is not so far off the mark!