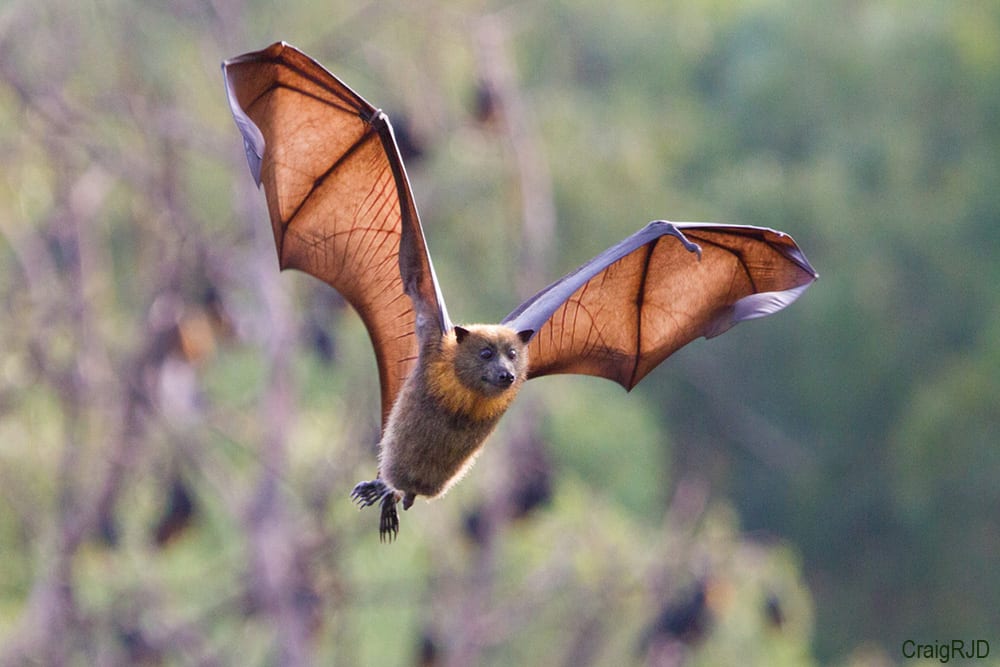 The coronavirus pandemic sweeping across the world is causing physical, social and economic disruption on an unprecedented scale.

By April 21, 2020, around 2.5 million Covid-19 cases had been reported across the world. More than 170,000 people had died, and the numbers keep rising. A huge proportion of the world’s population is in some form of lockdown as countries try to slow the spread of the virus. The cost to the global economy is predicted to run into several trillions of dollars.
The strain of coronavirus responsible for the Covid-19 pandemic is thought to have originated from wildlife. There has been much speculation over whether bats, snakes or pangolins, or some combination of these were the sources of the original human cases in Wuhan, China. However, importantly, whichever species are ultimately confirmed as the agents that transmitted the virus to people, wildlife is not to blame for the current pandemic. 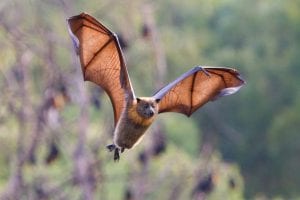 A flying fox in mid air flying towards camera. Look closely and you can see the veins in its wings. Shot taken at Yarra Bend Park in Melbourne, Australia.

Covid-19 is an example of a zoonotic disease – one that can spread from animals to humans. Many infectious agents have the potential to be zoonotic. The World Health Organisation estimates that 60% of all human infectious diseases recognized so far are zoonoses, and about 75% of emerging infectious diseases that have affected people over the past three decades originated from wild animals.
Recent human zoonotic epidemics include Severe Acute Respiratory Syndrome (SARS), another coronavirus which also emerged in southern China in 2002, which infected more than 8,000 people and resulted in 774 deaths. SARS is thought to have originated in bats and made its way to people via civets. Other notable examples of zoonotic epidemics include Ebola, Middle Eastern Respiratory Syndrome (MERS) and HIV.
SARS was considered a serious global epidemic. But although some jurisdictions in affected areas temporarily closed down wildlife markets at the time, they quickly reopened once the epidemic had subsided. Critically, the lessons we should have learned then were soon forgotten.
The impact of SARS has been dwarfed by that of Covid-19.
Viruses and other infectious agents with zoonotic potential circulate within wildlife populations all the time. In the past, however, most would never have made the jump to people, or if they did their impact would have been extremely limited. 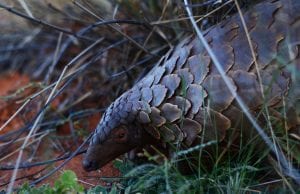 The reasons why zoonoses are becoming so problematic in today’s world lie in the way we humans interact with and exploit wildlife and natural habitats. Relentless development in pursuit of economic growth has carved inroads into wild habitats, granting easy access to poachers, traders, traffickers, and facilitating the collection and export of wildlife. Ill-advised expansion of human settlements into wildlife areas irrevocably leads to increasing contact, and often conflict, with wild animals.
Rapidly expanding human populations are placing massive demands on wildlife for nutritional and medicinal uses. Increasing disposable incomes among a burgeoning middle class have resulted in the commodification of wild animals as exotic foods, traditional medicines, “health tonics”, pets, high-end gifts, status symbols or investments.
Trade in wild animals, both legal and illegal, has grown exponentially. Wild animals are collected, farmed, transported, exported and traded in huge numbers, more often than not in appalling and unsanitary conditions. Crowding, stress and injury among such animals provide the perfect environment for pathogens to spread and mutate, and their close proximity to people during capture, farming, transportation, butchering, processing and trade creates many opportunities for human transmission.
What may once have been small-scale subsistence use of wildlife has become commercialised on a massive scale, facilitated by an unfettered global communications and travel infrastructure, with dire consequences for conservation, animal welfare and human health.
Several international conventions, institutions and conservation professionals continue to promote the idea of “sustainable” use of and trade in wildlife, as a means of giving monetary value to wild animals thereby incentivising their protection. As a result of decades of promotion by government, wildlife farming in China is estimated to be worth $74 billion dollars. In South Africa, the government has now listed 130 wild species as livestock as part of its “sustainable use” policies. However, when the potential costs of such activities are factored in, in terms of wildlife decline, the scale of animal suffering and the impact of pandemics such as Covid-19 on human lives and the global economy, the whole concept of sustainability clearly needs to be re-thought.
More immediately, the knee-jerk reaction from some has been a call for the extermination of animals that are perceived as a risk. We are already seeing reports from China and other countries of people calling for bat roosts to be destroyed. Pangolins, those gentle, shy, scaly insectivores that have already been devastated by poaching for their scales and meat, could be next on the target list. But it is not the animals themselves that are to blame. Destroying bat roosts or persecuting pangolins will do nothing to reduce the risk of future human health catastrophes; in fact, it could make things considerably worse as the balance of the natural world is further disrupted.
Back in 2015, Bill Gates warned that we needed to prepare for a global pandemic and called for planning to be put in place. Last year, eminent scientists from across the world identified the need for “transformative changes” in our relationship with nature if we are to stop and reverse the catastrophic and unprecedented declines in wildlife and biodiversity that we are causing, primarily through habitat destruction and commercial exploitation. Covid-19 has confirmed that change is needed, not only to protect the natural world but also to prevent future pandemics. Wildlife markets, with their vast array of wild animals with which people would not normally interact directly in the wild, certainly increase the possibility of harmful pathogens “jumping” to humans. The commercial capture, ranching, farming, trade and consumption of wildlife in all its forms, with its dire consequences for biodiversity, animal welfare and human health, must end.
Dr. Anthony Fauci, a prominent member of the US White House coronavirus task force, was recently quoted as saying, “It just boggles my mind that how, when we have so many diseases that emanate out of that unusual human-animal interface [wildlife markets], that we don’t just shut it down. I don’t know what else has to happen to get us to appreciate that.” Dr. Tedros Adhanom Ghebreyesus, Director General of the World Health Organisation, has stated that “governments must rigorously enforce bans on the sale and trade of wildlife for food.” Elizabeth Maruma Mrema, acting Executive Secretary of the United Nations Convention on Biological Diversity, said, “The message we are getting is if we don’t take care of nature, it will take care of us. It would be good to ban the live animal markets…” Many other experts are adding their voices to the calls for change.
However, we need to dig deeper still and reset our fundamental relationship with the natural world, rethink our place in it and treat our planet and all its inhabitants with a great deal more respect, for its sake and for ours.
One thing is for certain. Once Covid-19 is hopefully behind us, returning to business as usual cannot be an option.
Print page