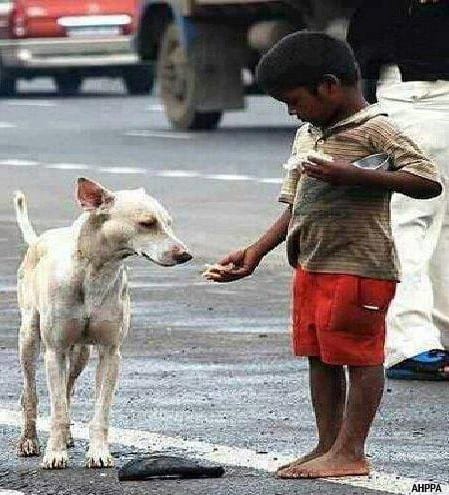 The pet care (food, treats and veterinary care) market and dog and cat “homelessness” are related. It is in everyone’s interest (animal NGOs, pet care companies and other stakeholders) to collaborate and work together to address (and end?) pet homelessness. Pet care companies have financial and technical resources (which would grow significantly if more dogs and cats were in homes rather than on the streets) while animal NGOs have large (and growing) human resources in terms of staff and volunteers as well as increasing public support. Ending dog and cat homelessness is certainly a very ambitious goal, but it is attainable if the various stakeholders can manage to work together to develop and implement appropriate solutions. The following article will be the first of several that address the importance and the benefits of building co-operative partnerships to address companion animal welfare challenges.

The global pet product market reached an estimated $125 billion in 2018 according to Euromonitor International, with 73% of that total (or $91 billion) consisting of pet food sales. Dog food accounts for the biggest segment of the pet food market ($35 billion) but volume growth in dog food sales have been relatively flat over the past five years while volume growth in cat food sales have increased because cat ownership has been increasing in Asia since 2013. North America is still the biggest market for dog food but Euromonitor reports that the Asian-Pacific countries are the next frontier. The dominant companies in the pet food market are Mars Petcare and Nestle Purina Petcare which control around one-third of the global market between them. Mars Petcare has also expanded into the veterinary care market in the last few years. The future prospects for pet care (including veterinary care) are excellent, with the global market projected to grow to between $203-270 billion by 2025 depending on which market research report one believes.
Pet food and pet care have been very profitable markets over the past thirty to fifty years. Pet product markets in Brazil, Russia, India, China and South Africa (BRICS countries) are now expanding rapidly. In China, for example, it is reported that the pet market grew by 27% in just 2017 to almost $25 billion and that there are now 91 million pet dogs and cats in 74 million households (dogs outnumber cats by around 10 million at the moment). In 2012, Euromonitor reported that there were 27.5 million pet dogs and 11.4 million pet cats in China. Since 2012, the population of pet dogs has doubled while pet cat numbers have increased almost 4-fold.
These trends have implications for the demographics of dogs and cats across the globe. The table below provides estimates of dog populations both Controlled (private) and roaming Street dogs (many of whom may be “owned,” albeit loosely).
As shown in the table, 58% or 500 million dogs are “homeless” roaming dogs. As these dogs move off the streets and into homes (a change that has taken place in North America and Western Europe since the last world war and that is now beginning to happen in a number of other countries – including many of the largest), the potential global dog food market is likely to double. 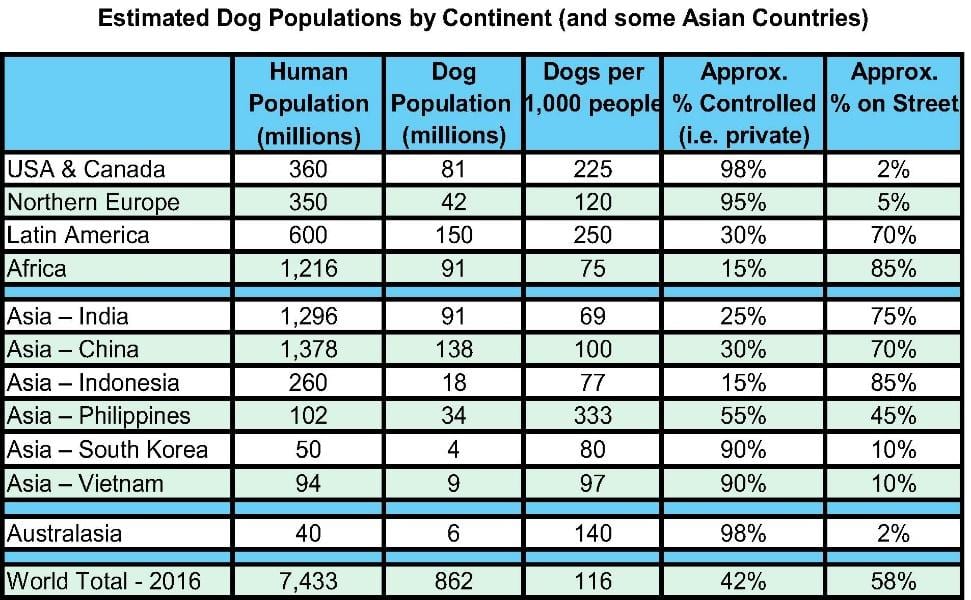 The global cat population probably also numbers in the 700 million to one billion range but there is very little information on the number of unowned outdoor (stray and feral) cats in the world. In Australia for example, there are an estimated 2.6 million pet cats while a recent academic study reported that there are 1.4 to 5.6 million (depending on the rainfall season) feral cats with another 0.7 million stray cats in and around urban centers. In other words, the “outdoor” cat population in Australia is equal to or more than double the pet cat population. The pet cat population is approximately 75% of the pet dog population in the forty-fifty countries surveyed by Euromonitor. The “homeless” cat population in the world is also likely to number in the hundreds of millions.
Ending dog and cat “homelessness” is achievable. In the United States, the number of “homeless” dogs and cats in 1973 (the number entering shelters) was at least 20 million and probably higher at a time when there were 65 million pet dogs and cats. Today, the number of dogs and cats entering shelters is around 8 million while the pet population is around 136 million (AVMA 2016 data). While animal shelter intake is falling across the developed world, developing countries have relatively few, under-resourced animal shelters. In those countries, the challenge will be how to move dogs and cats off the streets humanely.
Ending dog and cat homelessness could take fifty or more years to accomplish, but a concerted effort by stakeholders across the world (including municipal authorities, companies, professional organizations and the rapidly expanding world of animal NGOs) could shorten considerably the time to reach that goal if there were more collaboration, more learning and more adaptation to develop, test and implement strategies that work!
Print page