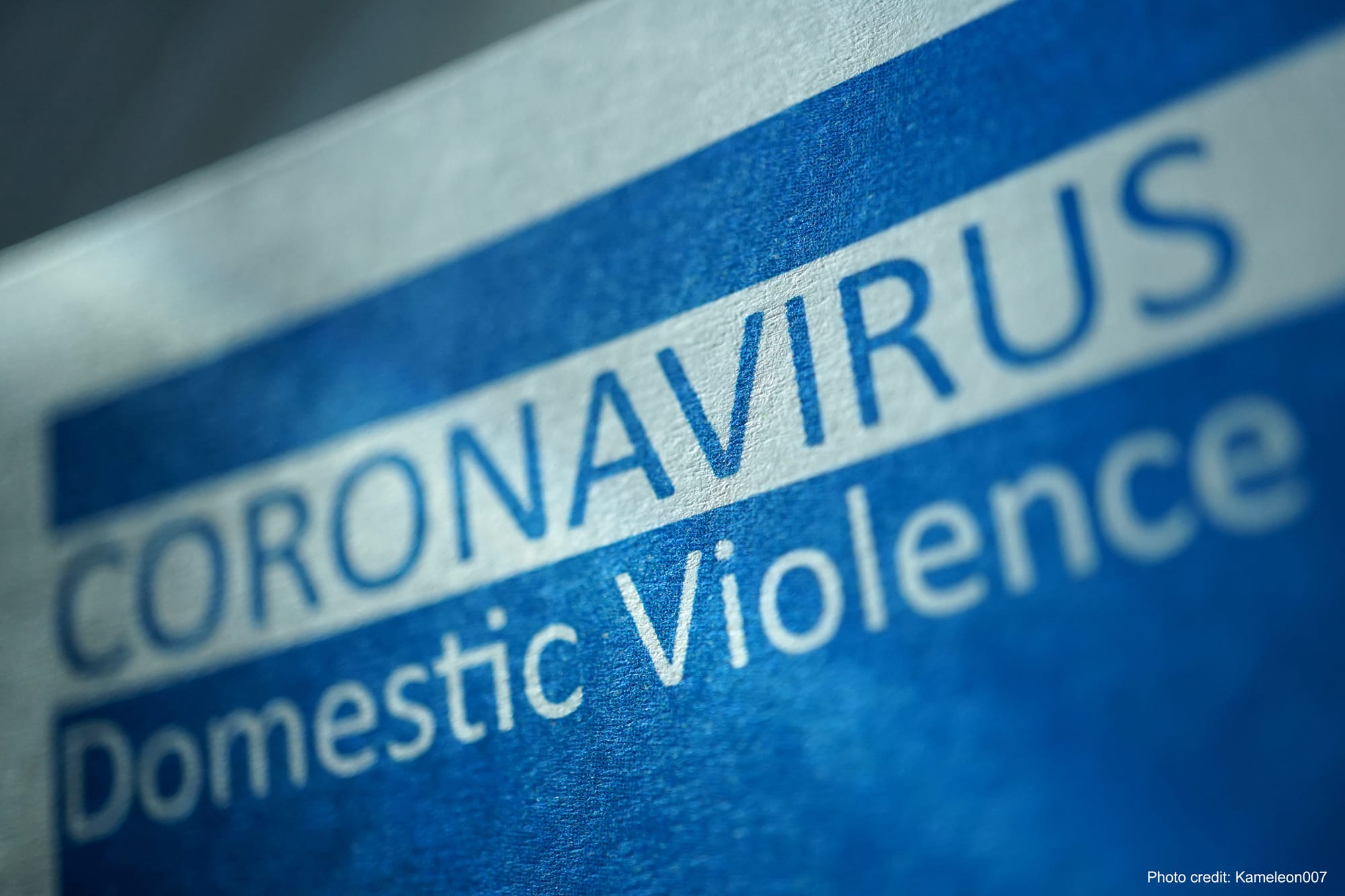 Sep 30, 2020 Unintended Consequences of COVID-19 Include Increases in Child and Animal Abuse and Domestic Violence

Posted at 14:51h By Phil Arkow and Andrew Campbell, PhD

Editor’s foreward: October is Domestic Violence Awareness Month. As part of its mission, WBI advocates for the safety and care of the human and animal victims of domestic violence

It is now widely recognized that the COVID-19 pandemic has had a ripple effect with unintended consequences affecting many aspects of society. One such area of great concern has been an increase in cases of family violence. What are the options for a survivor to be able to escape in a world where home is not a safe place to be during stay-at-home orders?

A confluence of factors has resulted in many cities reporting a dramatic increase in domestic violence. Survivors are trapped at home, under quarantine, with their abusers, with no safe space or a safe phone to call for help. When bars are closed, more people drink alcohol at home. Social distancing compounds the isolation imposed by abusers on their victims. Layoffs, furloughs, evictions and foreclosures increase economic hardship, a known risk factor for abuse and compounding stress. With schools closed and people reluctant to go to hospitals and doctors’ offices, primary sources of reports for child abuse have disappeared and children are forced to spend more time locked in with the abuser.

Meanwhile, sales of guns and ammunition have increased dramatically. We are being deluged with a firehose of negative news. Domestic violence shelters have struggled financially, have faced human resource shortages and have had to adapt to social distancing and sanitizing protocols which have severely affected their operations.

Child abuse is spiking as well. “People have so much increased stress right now,” said Jamye Coffman, M.D., medical director of the Cook Children’s Center for Prevention of Child Abuse and Neglect in Ft. Worth, Texas, which has seen a dramatic increase in cases of severe physical child abuse. “They’ve got financial stress. Some people lost their job or are worried about keeping their current job. They lost their income. You’ve got stress from being overcrowded. Everyone is cooped up together. They feel like they can’t get away from each other. These stressors can lead to abuse.”

And humans are not the only vulnerable victims in the home. Companion animals may often be the sole source of unconditional love, security, stability, companionship and comfort – all critical components of mental health – for victims of domestic and child abuse. But all too often, pets are the collateral victims of domestic violence and are harmed, threatened or killed by abusers to manipulate and control human victims. Many of these appalling acts of violence are done in front of human victims. In fact, abusers may often go out of their way to make sure that any children residing in the home witness the acts of animal abuse to further intensify the effect of their power and control on the household.

The COVID-19 pandemic is, in the words of one of us (AC) “a disaster in slow motion but we have been here before.” While the pandemic is truly a unique occurrence in its scale and scope, there have been warnings of what we could expect from studies of the impact of some previous natural disasters where the incidence of various forms of domestic violence has increased following the disaster (see table). Social service and violence prevention agencies should use the literature and experiences of disaster response to gain a better understanding of how vulnerable children, animals and women are being affected by the current stressors of lockdowns and quarantines. 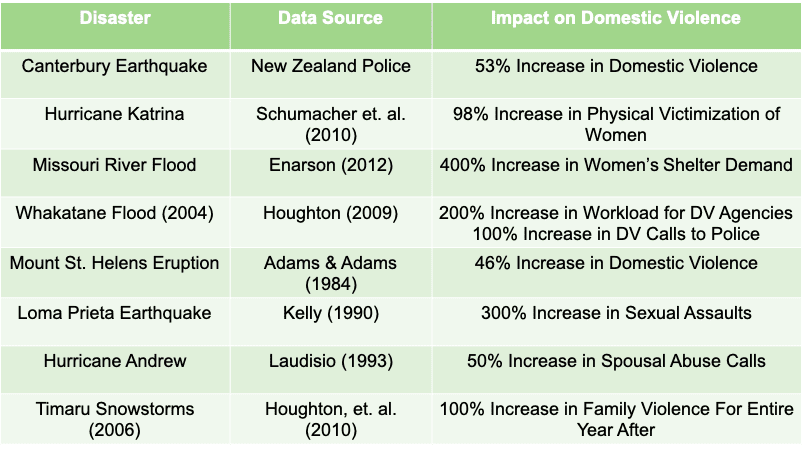 Many of the increases in family violence that occur during natural disasters are being seen during the current unprecedented pandemic, connecting “the disaster without” to “the disaster within.” As with all disasters, vulnerable people and animals who were already at risk are at even greater risk during the current pandemic and harming one member of the family hurts all members of the family (see Positive Links webinar by Andrew Campbell). 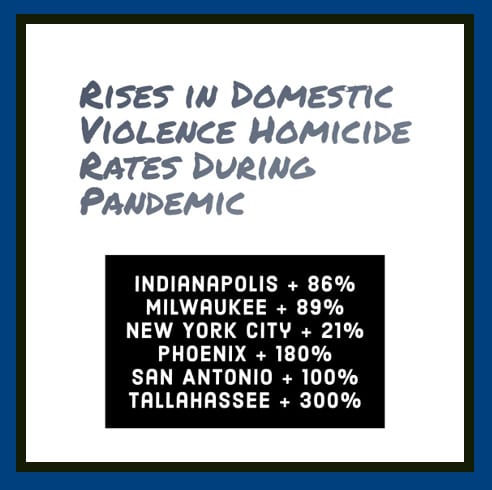 Disasters increase trauma, uncertainty and reliance on a partner or former partner. There may also be increases in substance abuse, volatility, the likelihood of controlling behaviors and mental health issues. While the disaster event itself may be a short-term phenomenon, psychological and emotional traumas can linger for up to 30 months – especially among vulnerable children. Experiencing a disaster makes people less likely to take risks, which may make women less willing to leave an abusive relationship.

Meanwhile, normal resources, routines, legal systems and sources of social support may be reduced or even disappear altogether. The inability to control the forces affecting the family can trigger damaging coping mechanisms, substance abuse and even more controlling behaviors. Violence and abuse become a control tactic and it is frequently visited on all the potential victims, both people and animals.

Existing disparities in a family are only made worse in a disaster. The 1980 Mt. St. Helens eruption led to increases in alcohol abuse, family stress and aggression while mental health clinics were already filled to capacity. Physical and sexual intimate partner violence were reported for up to two years after the 2010 Haiti earthquake where 52 aftershocks caused ongoing re-traumatization. A 98% increase in physical victimization of women was reported after Hurricane Katrina, where as many as 45% of people who had to evacuate the disaster area had PTSD.

Disasters adversely impact children. Depression, anxiety, inattentiveness, aggressiveness, bedwetting, social withdrawal and nightmares are more common in children for 18-30 months after a disaster and are likely exacerbated by family violence. Children’s behavioral changes add even more stress to an already stressed-out family. Reports of child abuse have surged during the COVID lockdowns.

Pets are also affected. Pets are attachment figures who provide people with psychological security and a safe haven. Anecdotal experience regularly confirms the disaster literature research on how families will risk their lives rather than evacuate without their animals, and often return to a danger zone to retrieve them. One study reported that 10% of all flood-related deaths in Australia during the 2011 floods happened to people who attempted to rescue a pet – even if it was not their own.

There tends to be limited interaction between public safety authorities and community animal control. This is unfortunate because their working together can be a real benefit for the animal and human victims of domestic violence. In one recent study, almost 80% of the calls to police reporting domestic violence came from the victim themselves (almost always when the abuser was not present). By contrast, 80% of animal control calls in the State of Indiana came from neighbors (only 8% of calls reporting domestic violence came from neighbors). Other studies have indicated that family violence and animal control issues frequently are observed in the same household so it would make sense for the police and the animal control officers to work closely together to help both humans and animals.

It is hoped that the current upsurge in domestic violence and trauma to people, animals and their families will lead to greater co-operation between town and county agencies in the future.

Phil Arkow is Coordinator of the National Link Coalition providing news and resources on the links between animal and human abuse. Andrew Campbell is the founder of Campbell Research and Consulting and an expert on domestic violence and the associated risks of harm for adults, children and animals residing in homes where violence, both physical and emotional, occurs.