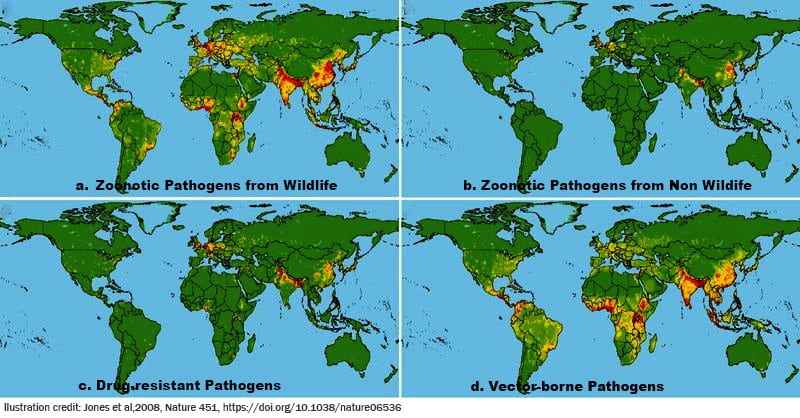 Mar 31, 2020 The Context for the Coronavirus Pandemic

Posted at 13:31h By Andrew Rowan, DPhil
At the beginning of this century, a review paper (Daszak et al, 2000) highlighted the importance of the consumption of wildlife as a major source of a series of dangerous new “emerging” pathogens.
The most well-known of these is the AIDS virus that was first recognized in 1981 and that has to date been responsible for over 32 million human deaths, over 75 million human infections, and annual global expenditures for prevention and treatment now running at around $20 billion a year. A later study reported that the number of new human pathogens emerging from wildlife was increasing and this article’s accompanying image indicates the hot spots for emerging infectious diseases (EIDs) for various types of pathogen.
The world has been living with blinders on. Periodically, a new study will raise questions about the dangers of wildlife consumption, but little has been done to slow or end such consumption. There are many constraints on the movement of domestic animals to prevent disease outbreaks, but relatively little effort has been devoted to containing the movement of wild animals from one country to another. AIDS illustrates the human health (and economic consequences) of new emerging diseases, but countries have been slow to establish controls to reduce and prevent the threat from such new pathogens. The relatively mild and quickly contained SARS outbreak cost the world $40 to $80 billion in just a few months. The COVID-19 pandemic, the estimated global economic impact of which is now running to $1 trillion or more, will hopefully accelerate new policies to prevent and mitigate the impact of new emerging pathogens and possibly give new impetus to ending wildlife consumption and habitat destruction.
Several reports have found that bats are the host mammals for a significantly higher proportion of zoonotic viruses than other mammalian groups. The latest published papers on COVID-19 indicate that the virus appears to be the most recent to have originated in bats, although pangolins (a much trafficked and consumed wild animal) have also been involved in its evolution. Apart from the restrictions placed on human travel, steps are now finally being taken to shut down the “wet” markets where one can buy and trade wild animals for consumption. These markets have long been recognized as a potential threat to human health and the Chinese government briefly closed them after the emergence of SARS in 2003.
“Wet” markets are found across the world. They are places where the shopper is confronted by a toxic mix of wild and domestic animals, blood, entrails, excrement and other waste creating ideal conditions for disease to migrate from animals to people. However, such markets are not the only source of new emerging viruses and pathogens. Our intensive animal agriculture facilities also provide a breeding ground for new pathogens. In 2009, the novel flu virus (H1N1) emerged from pigs though it was fortunately not particularly pathogenic. Although 60 million Americans caught the H1N1 “swine” flu virus, “only” around 13,000 deaths were attributed to it (mortality of 0.02%). But intensive animal agriculture operations continue to be a significant risk factor for emerging diseases, including both new viruses and drug-resistant pathogens, and especially new flu viruses.
The Chinese have now passed a law banning all “wet” markets in the country and regional authorities have begun to extend such bans. Shenzhen is proposing an additional ban on dog and cat meat consumption as well. But it is not clear just how far the ban on “wet” markets and wildlife consumption might extend. There is a very large network of wildlife farms in China producing live animals to be sold in “wet” markets as well as wildlife meat and wildlife parts sourced for Traditional Chinese Medicine. In a 2017 report, the Chinese Academy of Engineering estimated that more than 14 million people were employed in the farming of wildlife and that the industry had annual sales of $74 billion. It is not clear how the new laws will affect this industry or if they will be permanent.
China is due to host the 15th Conference of Parties of the United Nations’ Convention on Biological Diversity in Kunming, a southern Chinese city of around 5 million people and a major trade hub for South-east Asia. The theme for this meeting was announced last year as “Ecological Civilization: Building a Shared Future for All Life on Earth” but the emphasis continues to be on economic development and human interests despite the call to build “a shared future for all life” by “leveraging green sustainable development.” The current Coronavirus outbreak will no doubt have a considerable impact on this event, which is currently planned for October 2020.
The world has to take the threat of emerging pandemics much more seriously. First, the controls on wildlife trading across countries have to be strengthened considerably. Second, we should start discussing efforts to end the human consumption of terrestrial wildlife. With the world population reaching 8 billion and global wildlife populations and wildlife habitat declining rapidly, we can no longer afford to view consumption of wild animals as a human right. The COVID-19 pandemic is simply the latest and possibly the most serious manifestation of the threat to humans posed by the consumption of wild animals. And human demands for wildlife products are driving many species to the edge. Wild mammals now constitute only about 4% of global mammalian biomass but avian, amphibian and invertebrate populations are also plummeting, leading to grave threats to crops that require insect pollination.
The COVID-19 pandemic demonstrates that our political leaders can act decisively when faced with an acute threat. Let us see if we can push those leaders to show the same decisiveness in dealing with threats that are no less real but that develop over longer periods of time.
Print page