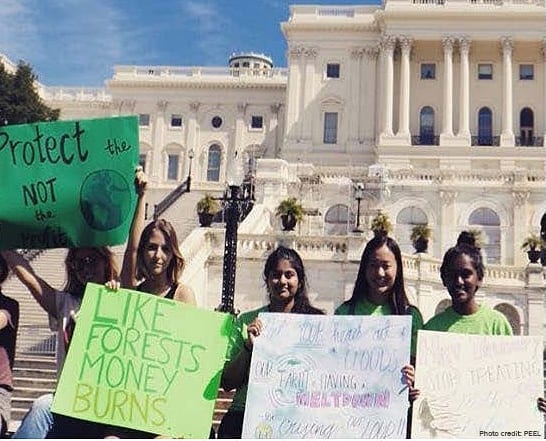 Posted at 08:55h By Ingrid Lesemann

During the week of September 23, 2019, six million people, young and old, across the globe took to the streets demanding urgent action on Climate Change. Meanwhile, institutional world leaders continue to “fiddle” while catastrophic change looms over the globe.

On the topic of Climate Change, we are at (or maybe even past?) a defining moment in time. Worldwide, disastrous flooding is increasing in frequency, seas are rising, and weather patterns are growing more erratic, threatening health, safety, and food security.
A global citizenry, especially youth, fluent in the broad details of environmental forces and trends, is essential to help the globe respond to the environmental threats it is now facing. The Program on Environmental Energy and Law (PEEL) of the Washington College of Law at American University (AU) is taking the Teach-In model developed during the 1960s to ensure that future leaders will be informed of important issues and trends.
The world’s future leaders (young people) are currently in schools and universities around the world and we need to give them platforms to express themselves and grow into the roles they will need to fill in coming decades. One such opportunity is the implementation of Teach-Ins in academia, first developed during the counter-culture era of the 1960s, which have continued to grow and strengthen in academic institutions.
Teach-Ins aided the political mobilization of a not yet fully political eschatological culture and effectively merged the countercultural and political into a successful national Anti-Vietnam War Movement. Like the 1964 Freedom Schools of the Civil Rights Movement, Anti-Vietnam War Teach-Ins educated students to become social change agents. On March 24, 1965, three thousand students, teachers, and members of the public participated in the first Anti-Vietnam War Teach-In at the University of Michigan at Ann Arbor.
By the end of the academic year, over 100 other university campuses broke away from the pattern of didactic classrooms where Faculty delivered selected material to Students and hosted Anti-Vietnam War Teach-Ins. Here, discussion among students and teachers was encouraged and knowledge of critical issues shared as equals. The same energy that fueled the Civil Rights Movement and politicized the 1960’s Counterculture prompted an Environmental Movement.
In April 1969, at a Conference at Airlie Center (founded in 1961 as an “island of thought” conference center and gifted to American University in 2016), Senator Gaylord Wilson shared his idea of a National Day of Environmental Teach-Ins on campuses across the country.
After facing years of indifference from fellow politicians about environmental protection, the Senator was inspired by Anti-Vietnam War Teach-Ins as a tool to manufacture political capital. The Senator was “satisfied that if [he] could tap into the environmental concerns of the public and infuse the student anti-war energy into the environmental cause, [he] could generate a demonstration that would force this issue onto the national political agenda.”
Senator Gaylord’s initiative led to the first Earth Day on April 22, 1970, when 20 million(!) Americans took to the streets to demonstrate for a healthy environment and hundreds of colleges and universities organized Environmental Teach-Ins to:
Ultimately, this activism led to the creation of the U.S. Environmental Protection Agency and the passage of a wide range of environmental legislation (e.g., Clean Air Act, Clean Water Act, Endangered Species Act, Occupational Safety and Health Act, and Toxic Substances Control Act). Together, these legal changes resulted in major improvements in the American environment over the next 50 years. Today, they are under threat as politicians and corporations argue that the current environmental regulations are overly burdensome.
In contrast to the past—where University Teach-Ins played a pivotal role in organizing and supporting the Civil Rights, Anti-War, and Environmental movements—Universities today have mostly become followers of national initiatives rather than centers initiating change.
With environmental crises across the country, and youth activism influencing society in profound ways—Teach-Ins could have a renewed importance and relevance for the environmental movement today. 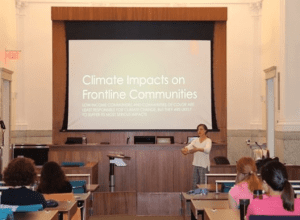 On Friday, September 20, 2019, the Program on Environmental Energy and Law (PEEL) of American University’s (AU) Washington College of Law, teamed up with youth climate-action organizations, Zero Hour and the Youth Climate Strike Network, to host a Climate Change Law & Policy Teach-In at AU. Students from local high schools (Wilson, Georgetown Day, and Montgomery) missed school to attend the Teach-In before they headed to the Youth Climate Strike on Capitol Hill.
AU Professor Bill Snape, and senior counsel with the Center for Biological Diversity, opened the session with an overview of U.S. Climate Change Law and Policy. Professor Amanda Leiter summarized the impacts of climate change on frontline communities, and Professor David Hunter explored international legal actions to address the climate crisis.  Each faculty member spoke for no more than fifteen minutes and then the Teach-In was opened to student comments and discussion. Students explored how they might affect policy (beyond simply missing school and attending marches) and a youth organizer from the state of Virginia discussed the importance of building cross-movement connections and solidarity.
“We are excited to partner with the inspiring young organizers of the D.C., Maryland, and Virginia Youth Climate Strikes to help ensure that tomorrow’s leaders are well informed and equipped to face the enormous challenges climate change will unfortunately pose for them and for future generations, both in the U.S. and around the world,” said PEEL Director and Professor Amanda Leiter.
With the planet (and our current civilization) facing grave peril, we all need to take informed civic action to defend our future and protect the environment.  Celebrate Earth Day’s 50th anniversary, by participating in the 2020 Global Teach in, here! The goal is to reach 500 million students worldwide!
Print page