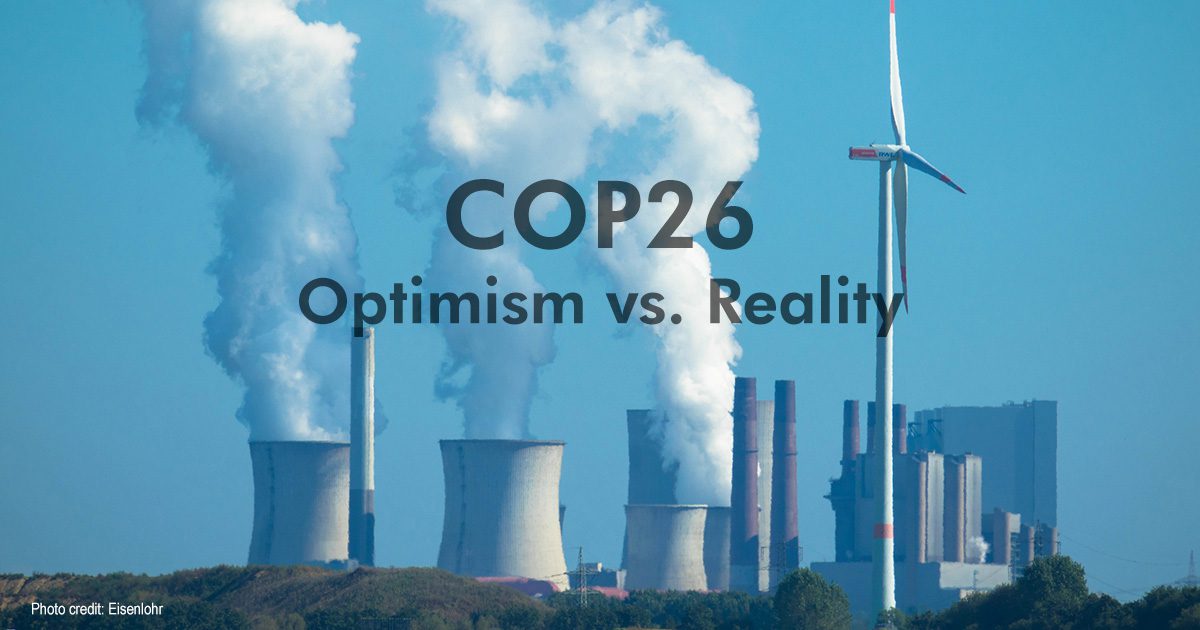 The Letter from the President for September 2021 addressed climate change. This Letter is a follow-up to the previous Letter in September, but we revisit the topic because its importance and gravity to humanity cannot be overstated. We hope to provide a brief primer on the what, how, and why of the current global attention to climate change and this latest meeting of countries in Glasgow at COP26 – an abbreviation for the United Nations (UN) 26th Conference of Parties including countries and other stakeholders.

Events Leading up to COP26

The main developments in global environmental diplomacy leading to the situation in which the UN and member nations now find themselves are as follows.

1987 – the Montreal Protocol – a historic global environmental agreement, ratified by every country globally, to stop producing substances (CFCs) that damage the earth’s protective ozone layer.
1992 – the UN Framework on Climate Change (UNFCC) was established and ratified by 197 countries. This framework was the first global accord to address climate change specifically. It founded the annual forum – the Conference of the Parties (COP) – at which international discussions aimed at stabilizing greenhouse gas emissions occur.
2005 – the Kyoto Protocol was opened for signature in 1998, but it would not become legally binding until at least 55 countries (that, together, accounted for 50% of global carbon dioxide emissions) ratified it. In 2005, Russia became the 55th country to ratify the agreement, at which point it became legally binding. The treaty required the signatories to reduce their carbon dioxide emissions by at least 4.7% from the 1990 baseline. Carbon dioxide emissions from the signatory countries dropped by 12.5% from 1990 to 2012. However, global carbon dioxide emissions by all countries (the USA and China never signed the Kyoto protocol) have increased by 51% since 1990. While some point to the Kyoto Protocol as a great success, the global picture indicates it has had little real impact on slowing carbon emissions (see chart).
2015 – the Paris Agreement was opened for signature on Earth Day (April 22), 2016. As of October 2021, 192 countries had ratified the agreement. The only significant emitters of greenhouse gases that have yet to sign are Iran and Iraq. The agreement’s long-term temperature goal is to keep the rise in average global temperature to under 2oC and preferably to under 1.5oC above pre-industrial levels. Emissions should be reduced as soon as possible with the aim to reach Net Zero.
2021 – the COP26 meeting in Glasgow this year brings many expectations that it will produce another significant step forward in developing, especially implementing, practical efforts to reduce global warming. While Glasgow may appear to be an odd place to hold this important conference, the city is a member of the 100 Resilient Cities network. This network is focused on coming challenges, including climate change, and how they may be effectively addressed. There are great hopes for COP26 to gain agreement on more ambitious greenhouse gas reduction targets. For example, Boris Johnson, the UK Prime Minister and host of COP26, has set a target for the UK to cut greenhouse gas emissions in 2035 by 78% of the country’s 1990 emissions.

How is Carbon Neutral or Net Zero determined?  Whether talking about an individual, a home, a business, a country, or the world, the calculation begins with identifying the level of carbon emissions that the individual or entity produces. This baseline level should include the direct and indirect greenhouse gas emissions (or gases) converted into carbon dioxide equivalents. These calculations are far from simple and must reflect the individual’s or entity’s overall sustainability strategy. This strategy should identify what emissions can be influenced and what measurable goals can be established and measured. Once a baseline is determined, the first step should be to seek as significant a reduction in emissions as possible. Next, the individual or entity should invest in carbon sinks (offsets such as forests). Typically, corporations and other entities purchase or invest in appropriate offsets to balance their greenhouse gas emissions to reach Net Zero.

Although Carbon Neutral is a significant step forward, attaining Net Zero is the ultimate end goal. It is the point at which human activity no longer causes global warming. The whole world must reach net Zero.  Everyone (global citizens, the private sector, and governments) are in this together. Transparency in reporting and international accountability will be essential to stop global warming.

Where We Are Now

The Glasgow meeting follows the latest report by the International Panel on Climate Change (IPCC), released on August 9. The report’s language was uncompromising. The panel concluded that “It is unequivocal that human influence has warmed the atmosphere…” and concluded the scale of the recent changes in the climate system is “unprecedented.”  The average global surface temperature has already increased by around 1.1oC compared to 1850-1900. The global temperature is at a level that has not been experienced for 125,000 years (stretching back to before the most recent ice age). It is theoretically still possible to limit global warming to 1.5oC but reaching that target will require immediate, large-scale reductions in the release of all greenhouse gases. It is unlikely that there is sufficient political will to agree to and implement such significant reductions. 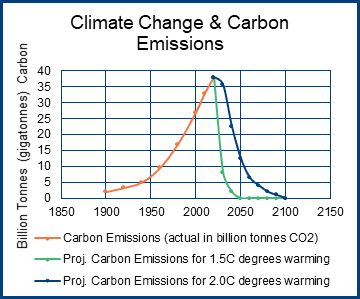 Based on data reported by Our World in Data, the figure indicates achieving reductions in greenhouse gases to keep the global temperature increase to less than 1.5oC will require a very rapid and dramatic decrease in greenhouse gas emissions and increases in carbon dioxide capture. Keeping below a 2oC rise is also an ambitious target. Meanwhile, the world has already experienced dramatic changes in weather and rainfall at just a 1.1oC increase in average global temperature.

The COP26 in Glasgow that started is another major inflection point in global attempts to address climate change. One of the sticking points in reducing carbon emissions will involve a showdown between rich and emerging countries on how best to finance a reduction in emissions. Significant resources will be needed. In the US alone, it is estimated that the switch to renewables by 2050 to provide all the country’s energy would be in the range of $8-14 trillion. However, the annual costs of replacing and investing in power infrastructure currently amount to around 5% of GDP (or $1 trillion). In other words, we are talking about continuing routine infrastructure upgrades but replacing fossil fuel generators with renewables and storage systems. Something similar would happen to jobs. The new jobs to build and maintain renewable energy systems will replace those jobs involved in coal, oil, and gas infrastructure. Countries with relatively limited power production infrastructure would, preferably, install renewable systems (which are now cheaper than fossil fuel generation) rather than build power stations running on fossil fuels. But poorer, less-developed countries need free access to technology, funds, and investment to install infrastructure for renewable power generation.

While fossil fuel power generation is falling, installing renewable power systems is not happening fast enough to support existing power demand and continued growth. However, change is happening. In 2019, the US consumed more energy from renewables than coal for the first time since 1885. The cost of generating power from solar and wind renewables has fallen dramatically in the last ten years and is now cheaper than coal, oil, or gas power generation.

There is no question that COP26 is occurring at a critical time for the world. While new technology developments give room for optimism, human inertia and political challenges stand in the way of a rapid change in the global energy supply. But the world is, at last, taking the challenge of climate change seriously. With sufficient global investment in renewables, free access to needed technology, creating incentives for countries, their citizens, and the private sector driving the shift to renewable energy, low-income countries can carry on with development from the ground up. These efforts will support continued global progress in eliminating poverty and hunger and raising global standards of living. But we will need greater transparency and accountability by nations.

One small step that could help ensure transparency would be if the International Energy Agency (IEA) would open its data on energy measures to everybody rather than keeping such data behind a paywall. Our World in Data has called for the IEA to make its data freely available and points to reports indicating that access to such data could amount to trillions of dollars of value a year. The open availability of energy data would certainly enhance national transparency and accountability as the world grapples with addressing climate change.