William H. Whyte (1917-1999) may be best remembered as the author of The Organization Man. This 1956 bestseller described a corporate America in which, he argued, our esteemed sense of rugged individualism had been replaced by a softer ethos of conformity and “groupthink” (Whyte took this term from George Orwell). Amplified through other outlets such as the popular movie The Man in the Gray Flannel Suit, the image of legions of corporate males complemented by their domestic female home builders came to define the America of the 1950s.

Whyte arrived at his characterization through interviews and field excursions into the business world as a writer and editor for Fortune magazine. But the seeds for his social critique had been sown upon graduation from Princeton in 1939 when he took a plunge into corporate culture working for the nascent Vicks® VapoRub company. He followed this position with a stint in the biggest corporation of all — the U.S. military — where he participated as a Marine Corps officer in the assault on Guadalcanal. Interesting facts, but what do they have to do with the well-being of animals, people, or both?

As a recently published biography (American Urbanist, Richard K. Rein, 2022, Island Press) recounts, “Holly,” as he was known to his many friends and associates, was a “man who loved cities.” He was a champion and early advocate for scalable urban planning and design that attended to the street-level urban citizens’ needs. The result, as Rutherford Platt characterized it at a conference to honor Whyte three years after his death, was the concept of the “Humane Metropolis.” This concept was the idea that was to engage Whyte almost exclusively as he left Fortune to work on urban issues. After Whyte’s 1956 bestseller, he turned in 1957 to contributing to and editing a collection of essays in The Exploding Metropolis: A study of the Assault on Urbanism and How Our Cities Can Resist It. Among the contributors was Jane Jacobs, whose own work The Death and Life of American Cities (1961) would become a classic in the urban planning literature. At a time when urban centers were losing residents in wholesale flight to the suburbs, expressways were bisecting neighborhoods and planning focused on monumental and dehumanizing building programs, Jacobs and Whyte threw down a gauntlet to challenge how we conceptualized and designed our urban landscapes that still reverberates today. 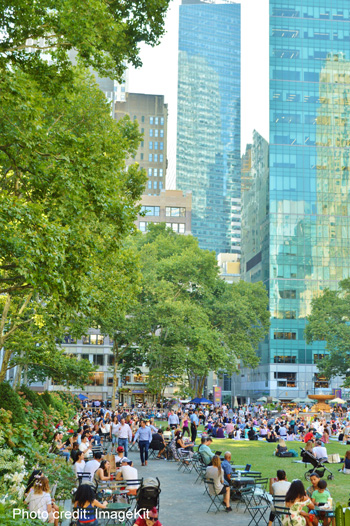 Whyte’s subsequent work, The Last Landscape (1968), focused on practical ways to preserve open space, such as conservation easements and cluster development that are common now but were unheard of then. He followed this with The Social Life of Small Urban Spaces (1980), an ethological study of humans in urbanizing environments, before finishing with City: Rediscovering the Center (1988). In what some say was his magnum opus, Whyte focused on how design could be used to enhance the health and well-being of the individual in the city.  One of Whyte’s signature projects was Bryant Park in New York City[i]

For all his prescience and instinct for what made cities more humane, Whyte was just a bit too early to see the contemporary wave now breaking around the idea of urban health and well-being. The current thinking embodies the idea that the lives of urban residents are bettered by access to urban nature. To Whyte, green space primarily meant parks and public spaces designed to create places that facilitated human interactions. Today, the concept of urban nature assumes a much broader position in planning, referring to an entire panoply of green spaces that serve up different amenities and ecological services as part of a holistic urban ecosystem. Studies on access to nature and its effect on physical and mental health now abound. The rights of city dwellers to access green space are increasingly codified through regulations, and that access is argued and defended as a matter of social justice.

This recognition is happening as we acknowledge that humanity is committed to an urban future. Urban growth in the next decade will be unparalleled, much of it coming in the Global South. How can existing and emerging cities incorporate green space into design? What sorts of urban nature are most compatible with human interests and city activities? What role (if any) do nonhumans have and will play in making cities more livable? Finally, will there even be room for anything green in the city of the future? These are all open questions.

While there is growing proof that the quality of human life is bettered when green space of all sorts is incorporated into the urban matrix, this does not mean that planning for this will become an accepted practice. There are powerful economic and social forces contributing to the belief that open space is wasted space. It will take more visionaries like Holly Whyte to battle this perception, help establish rights of access to green space, and argue we have a duty to advocate for urban nature if the urban future is to become a better future.

[i]One of Whyte’s signature projects is Bryant Park. Whyte recommended that the park include movable chairs (like Luxembourg Gardens in Paris) so users could control their own space. Initially, the idea was ridiculed, but it proved highly successful and has now spread to other parks in the USA. The park is a 9.6-acre public park located in Midtown Manhattan, New York City, and is privately managed. Additional information on Bryant Park’s history and renovations can be found on Wikipedia.  Promoters claim it is the most visited park in the world.