Posted at 07:15h By Andrew Rowan, DPhil
The second Cape Animal Conference in September was held at the University of Cape Town (UCT) courtesy of a student group, We Are Animals, that allowed the organizers to make use of UCT lecture facilities. The conference “theme” involved an examination of how laws and their application affect animal protection in South Africa. However, the conference also included talks on a wide range of topics including service animals, links between human and animal abuse, lectures on farm animals and veganism and leopard protection. In addition, WBI gave a presentation on global dog management issues and how such issues might present in South Africa. 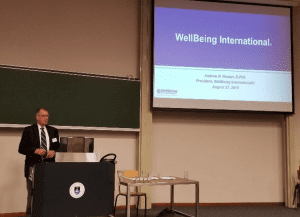 The evolution of animal protection laws is a particularly pertinent topic in South Africa at the moment following the finding at the end of 2016 by the Constitutional Court that the National Society of Protection of Cruelty to Animals (NSPCA) had the statutory power to initiate private prosecutions. Previously, the NSPCA had to rely on the national prosecuting authority to pursue its cases. The Court decision included the following sentence – “the rationale behind protecting animal welfare has shifted from merely safeguarding the moral status of humans to recognizing the intrinsic value of animals.”
This statement represents a major departure from the traditional justification for preventing cruelty to animals that extends back to St Thomas Aquinas in the 13th Century. St Thomas argued that humans had no direct duties to prevent animal cruelty but, if humans did not punish animal cruelty then leniency towards animal cruelty might lead to humans being cruel to fellow humans because animals are similar to humans. In other words, abuse of animals is not wrong because animals have moral status, but because of the indirect adverse effects on other humans. The South African Constitutional Court specifically rejected this reasoning. In commenting on the case, the NSPCA welcomed the recognition of animal sentience and the importance of animal protection and welfare.

aggressive in the past few years, especially in challenging what it views as illegal behavior by government entities and individuals. For example, the NSPCA recently won a case in which it challenged the Department of the Environment for not considering animal welfare concerns in setting quotas for the trade in lion bones.

While there are many welfare concerns over the captive breeding of lions (there are an estimated 9,000 lions in around 200 captive-breeding facilities in South Africa), there just seems to be something intrinsically wrong about “farming” lions to support a trade in lion bones. Despite this, during the final panel on legal approaches to animal protection, attendees at the Cape Animal conference learned that the South African government had approved a brief amendment (to the Animal Improvement Act governing livestock breeding) in May of 2019 that added not just lions but also cheetahs, rhinos, zebras and 29 other wild species to the list of animals classified as farm animals.
According to reports, this amendment was added as a result of a request from “the industry” to facilitate game farming. But there are major welfare concerns about classifying these 33 wild species as farm animals and one hunting association expressed concern over the potential for genetic manipulation and pollution of wild species.
Print page