Jul 30, 2019 Bella the Pig, the Inspiration for a Farm Animal Sanctuary 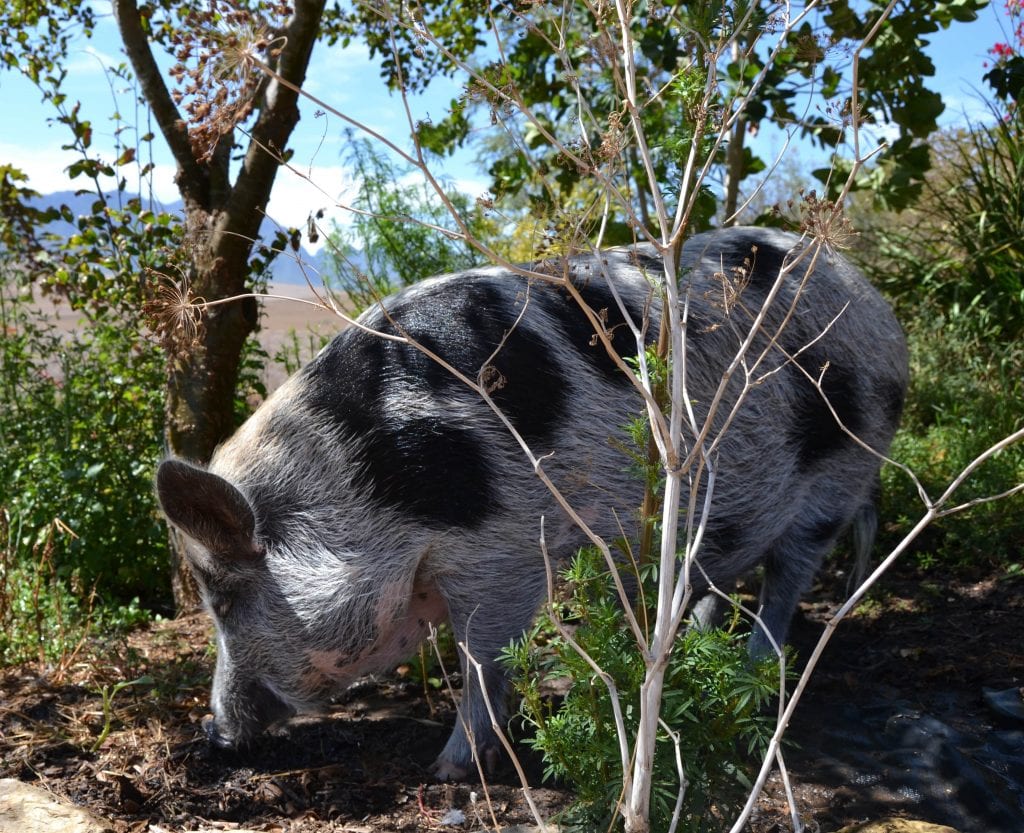 It is 5.30 in the morning and it sounds like the gates of hell have opened and the tortured demons are screaming from the midst of the inferno. Bella and ninety other pigs are ‘singing’ for their breakfast. They are hungry and they want food. Now. So, despite the fact that the sun has not yet risen over the peaks of the Riviersonderend mountains in our little corner of South Africa, the weary residents and volunteers of the Greyton Farm Animal Sanctuary (GFAS) stumble out into the feed preparation room and gather up the bowls and buckets we prepped the night before. Within a few minutes the demons have been replaced with what sounds like a babbling brook as 91 snouts blow away the dirt and delicately pick up each perfectly clean pellet of food with a satisfied smack of the lips.

GFAS sits on its own rolling 100 acres of land in the Western Cape, just 90 miles from Cape Town and 4 miles from the lovely village of Greyton. Nicky Vernon officially launched the sanctuary in November 2014, although she and her friends had been rescuing orphaned or abandoned lambs from the neighbouring farm fields for ten years prior to that. One of the events that prompted her to convert the farm into an official sanctuary was the arrival of Bella, a glossy, furry, black and grey pet pig who stepped daintily out of her owner’s very small car and into Nicky’s heart.
From that point on, Nicky was besotted with pigs. Their eyes hold such sentience and awareness, and they are so darned smart. If they want something, they will get it. They are capable of playing the long game, biding their time until you think everything has been settled and then they unleash a plan they had obviously been hatching for a while.
Bella was typical of her kind. She had been raised by Chris Silverston, a potter from the village of Kalk Bay nestled between the sea and the mountains on the Cape Peninsula. Chris had allowed her pet ‘mini’ pig to wander freely around her area. Bella, like so many pet pigs, soon outgrew the term ‘mini’, reaching around 120 kgs within two years. Such a big and unusual animal strolling around Kalk Bay soon caught the attention of the municipal authorities and Chris was told that the by-laws prevented such animals being kept as pets. Distraught and desperate, Chris searched far and wide until she discovered this place in Greyton where lambs were being rescued. 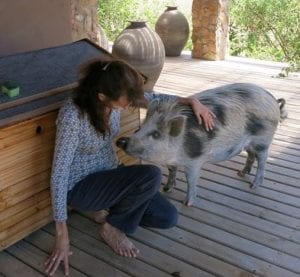 At first Bella was petulant and cross, having been uprooted from all she had known. Pigs have the emotional intelligence of a three-year old human child and she threw 120 kg-tantrums around the farm, even once grabbing Nicky by an ankle, pulling her to the ground and tearing at her stomach. Nicky escaped that tantrum but the injury on her leg endures as a huge scar to this day.
Despite these tantrums, Bella was showered with love and care, and she soon began to respond. The arrival of two more pigs, Genevieve and Michelle, changed everything for Bella. These two pigs, a mum and her four-month-old daughter, were rescued from a township fire in Grabouw, another village some twenty-five miles away. Genevieve (now Gen) was very badly burnt and not expected to survive but, with intensive nursing, she pulled through. Bella stood outside the special paddock that had been built for the two new pigs, watching proceedings. One day Nicky allowed her in, watching carefully. Bella inched gently towards Gen, blowing softly and grunting. Gen lifted her head and returned the greeting. From that moment on the two ladies were inseparable.
It turned out that Michelle was already pregnant and three months later she gave birth to four very fragile piglets. By this time a large farm pig, Rosie, had arrived and had also been accepted by Bella and Gen. They now had the run of the farm and often spent time sunning on Nicky’s stoep (porch), where Bella’s large kennel had been placed.
One night, Nicky heard some piggy negotiation going on – deep grunts, snorts and blowing. She investigated and witnessed what could only be interpreted as Michelle begging Bella to give her and her teats a night off. A few minutes later Bella was installed in the kennel with the four babies where she kept them warm and dry throughout the night while Michelle had her first good night’s sleep for weeks.
From that point on it was Aunty Bella and Aunty Rosie who helped Michelle raise her babies. Gen was still recovering from her injuries, so she was happy to sit this one out and let the volunteers take over.
Chris, Bella’s original human companion, continued to visit. Bella, while she was still of a size to get into Chris’ car, stepped in and was taken to the river nearby where she loved to swim. She even went for walks around Greyton but this time on a leash to keep on the right side of the law.
As she grew bigger, the walks had to stop but she was content to live in her new paddock with Gen, Michelle, the babies and Rosie, wandering far and wide over the 100 acres during the day.
Sadly, just a few months ago, Bella’s bright, intelligent and curious spirit got the better of her and she investigated a curious hissing noise underneath a large stone. Her huge physical strength enabled her to turn over the stone which revealed an angry Berg Adder (a poisonous snake). Bella was bitten on the snout and succumbed within minutes. It was a fast, painless and natural death for an animal who should never have been confined or used in the first place. She was one of the lucky ones, sharing her life with several humans, first in Kalk Bay and then in a sanctuary where she was able to live a normal piggy life – a privilege denied to the majority of the 900 million pigs raised for human food worldwide every year.
Bella will never be forgotten, she still graces the Sanctuary webpage (www.greytonfarmanimalsanctuary.com) as the cover pig, standing out in the fields with Michelle and her babies, forever free.
Print page