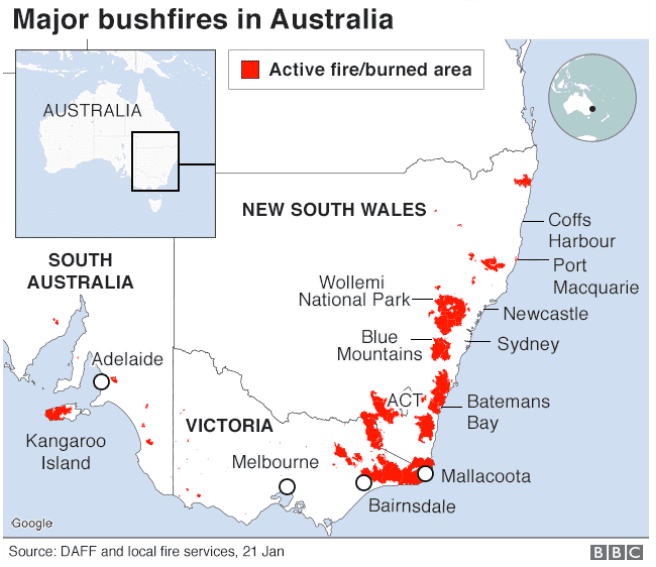 Jan 29, 2020 Australian Bushfires – Hell on Earth for People, but especially for Wildlife

Posted at 07:52h By Michael Kennedy, AM (Member of the Order of Australia)
The Federal Government in Australia was warned by a group of ex-fire chiefs early in 2019 that the country was facing a potential fire disaster scenario that was in part due to the ongoing and significant effects of climate change. The group asked for a meeting with the Prime Minister on two occasions but were refused. They didn’t get the chance to explain to a climate change denying government the need for an emergency plan essential to cope with a looming apocalypse.
What happened next has already found its way into the history books, and for all the wrong reasons. So far, some 10 million hectares (25 million acres) have burned in 5 states with estimates of wildlife deaths at 1 billion, though in all likelihood, it will be substantially more. It has been an unmitigated ecological disaster on a scale that has yet to be fully appreciated…almost defying comprehension…every aspect of this environmental calamity is unprecedented.
Exhausted fire-fighters along the entire east coast of Australia are working under extreme conditions, while 28 have tragically lost their lives and thousands of homes have been lost. Similarly, wildlife rescuers, carers and rehabilitators are so utterly overwhelmed, facing multiple horrors and stresses that many are calling for psychological help.
The ecosystem damage is only just beginning to dawn on scientists across the country. Even ancient rainforests in New South Wales (NSW) and Queensland that have never been burnt before, have been ravaged. Ancient trees are being consumed by fires of inconceivable intensity. It seems likely entire species will have been lost that we didn’t know existed in the first place. Small, restricted populations of threatened species will also have been wiped out while World Heritage sites have been seriously damaged, and some threatened habitats perhaps completely gone.
Five major conservation organisations wrote to the Environment Minister Susan Ley in January spelling out critical actions that her government should be taking, including recruiting appropriate experts; supporting emergency species recovery interventions; providing financial support to wildlife rescue and recovery organisations; supporting the Federal threatened species scientific committee to urgently assess bushfire affected species and habitats; and rapidly evaluating impacts on World Heritage values and RAMSAR wetlands (wetlands listed under the 1971 Convention on Wetlands adopted in the Iranian city of Ramsar).
A leaked Victorian State Government report in the Age newspaper this week gave some new and horrifying statistics. Forty percent of Victorian habitats for the sooty owl, diamond python, long-footed potoroo and brush-tailed rock wallaby have been wiped out. An estimated 25% of the sooty owl population has been killed. The East Gippsland galaxias freshwater fish has lost 100% of its possible habitat and more than 70% of the Gippsland water dragon habitat is gone. Some populations of koala, alpine tree frogs, and green and golden bell frogs have lost 40% of their habitat. The unbelievable statistics go on and on.
Australia was already suffering from the chronically bad conservation policies of the Federal and state governments of the past decade that had eroded environmental protections and budgets. Many politicians are focused simplistically on jobs and coal mines with minimal concern for long-term environmental health and the protection of Australia’s extraordinary natural heritage. What we are facing now is even more denial in the current government. One Prime Minister who wanted to deal with climate change lost his post because the current government doesn’t want the status quo changed. Climate deniers in government are now blaming the fires on a lack of back-burning (to remove fuel that might support fires) and even on arson. Proposed solutions now consist of more land clearing, forest “thinning” and a continuous program of back-burning. You even still hear complaints that “there are too many trees!”
People have responded magnificently to the emergency. This response includes countries, organisations and individuals from around the world. Thoughts of koalas dying in the tens of thousands and the pictures flashed around the world of burning and burnt koalas have had a lasting effect. Australians extend deepfelt thanks to the international community for its magnificent response. The Commonwealth has so far allocated $50 million for wildlife recovery efforts (but we will need billions) and an expert panel of scientists is now trying to determine immediate conservation priorities. But a very conservative, populist government may yet hold onto power and continue to deny the impact of global warming.
We are now in uncharted territory. There has never been an Australian disaster of this magnitude. Public anger in the country continues to build. With the eyes of the world upon Australia as a portend of an ominous future and a growing percentage of the public viewing climate change as a serious threat to them and their communities (68% of surveyed people in 26 countries and the proportion has increased by 10-20 percentage points in just six years), it is not clear how much longer politicians can continue to deny that the issue is an immediate existential threat for people, animals and the environment.
Print page