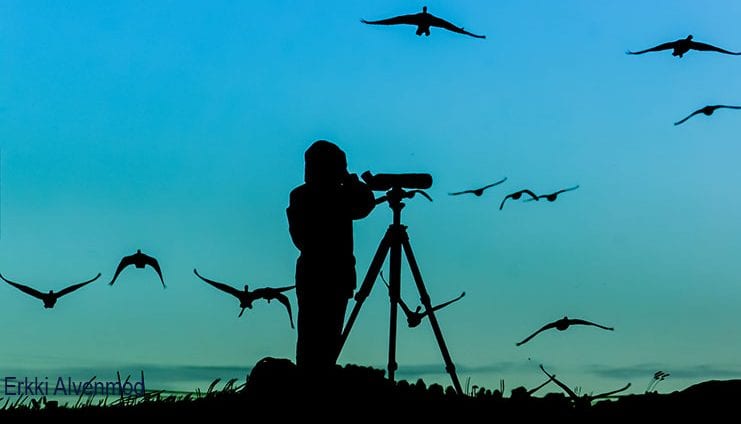 Dr. Stephen Kellert of the Yale School of Forestry performed some of the first large scale assessments of American attitudes to wildlife in the 1970s. He generated a set of attitudes/values and estimated the proportion of Americans strongly oriented toward a particular value. For example (total distribution adds up to more than 100% because there were overlapping value distributions), 35% of Americans were Humanistic (enjoying animal companionship and affection), 20% were Moralistic (includes animal welfare advocates) while 20% were Utilitarian (saw wildlife as a resource for humans) and 35% were Neutralistic (basically exhibited a passive avoidance of and lack of interest in wildlife). The remaining values were Naturalistic (10%), Ecologistic (7%), Scientistic (1%), Aesthetic (15%), Dominionistic (3%) and Negativistic (2%). Kellert and a colleague (Miriam Westervelt) then followed up by looking at changes in US attitudes to wildlife over time (from 1900 to 1976) and found that Utilitarian values had declined.

Kellert and Westervelt’s study involved an analysis of the coverage of wildlife issues from 1900 through 1976 by four newspapers, two urban (the Los Angeles Times and the Hartford Courant) and two rural (Buffalo Bulletin, Wyoming and the Dawson News, Georgia). Steve Kellert told me that it was among the most difficult projects he undertook because reading and coding the articles in the newspapers was so time-consuming (and tedious).
The authors reported a substantial decline in the Utilitarian perspective over the period studied in the urban newspapers but little change in this perspective in the rural newspapers. During the period of the study, the proportion of the American population that was classified as rural declined from 60.4% in 1900 to 26.4% in 1976. Therefore, there was a substantial decline in the Utilitarian among the US population overall. (The initial Kellert paper reporting these values and the later Kellert and Westervelt paper are both available at www.animalstudiesrepository.org.)
A new study (Manfredo et al, 2018) of US attitudes to wildlife and how they varied over time (2004 to 2018) and from state to state reports continuing declines in Utilitarian values. The new study identified four main wildlife value types (not eight as in the Kellert study) – Utilitarian or Traditionalist (human mastery over and use of wildlife), Mutualism (live in harmony and co-exist with wildlife), Pluralist (score high on both Utilitarian and Mutualism values, attitudes are situational), Distanced (low scores on both Utilitarian and Mutualism values, low interest in wildlife). The authors document a 6% decline in the proportion of the US population holding to Traditionalist values and a corresponding 5% increase in the proportion of people holding Mutualist values.
The authors attributed these changes to increasing urbanization and levels of education. In addition, they note that the percentage of adult American males who hunt has declined from 13% in 1990 to 9% in 2016. This represents a drop of 20% in the actual number of hunters. During this same period, the percentage of people interested in watching wildlife has grown by 37%. 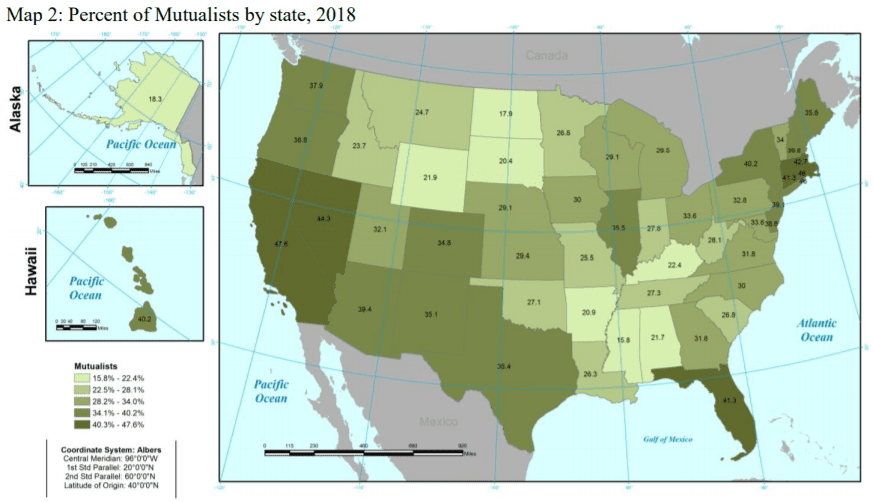 There are large state-by-state differences in the percentages of people holding each value. The chart above shows the state-by-state percentages of people holding Mutualistic values. These vary from a high of 47.6% in California to a low of 15.8% in Mississippi. In eight states (California, Rhode Island, Nevada, Massachusetts, Connecticut, Florida, New York, and Hawaii), more than 40% of the population holds Mutualistic values. In Mississippi, Arkansas and North Dakota, less than 20% hold Mutualistic values.
These differences will likely have a significant influence on the policies advanced by the respective state governments. Only 9% of Mutualists agree with the statement that private property rights are more important than protecting declining wildlife populations compared to 38% of Traditionalists. When asked if we should strive for a society that emphasizes environmental protection over economic growth, 82% of Mutualists agreed compared to only 46% of Traditionalists (75% of Pluralists and 58% of Distanced also agreed with the statement).
It is likely that these trends in US attitudes will continue to move towards a more Mutualist outlook. For example, in the wake of the recent shootings of Cecil the lion, Voortrekker the elephant and other charismatic animals, trophy hunting is under siege. At the same time, wilderness areas are contracting and disappearing. At one time, humans feared wilderness as dangerous and unpredictable but, today, humans regard wilderness and nature as peaceful and nurturing. That is why the loss of both terrestrial and marine wilderness is taking center stage across the globe.
Print page