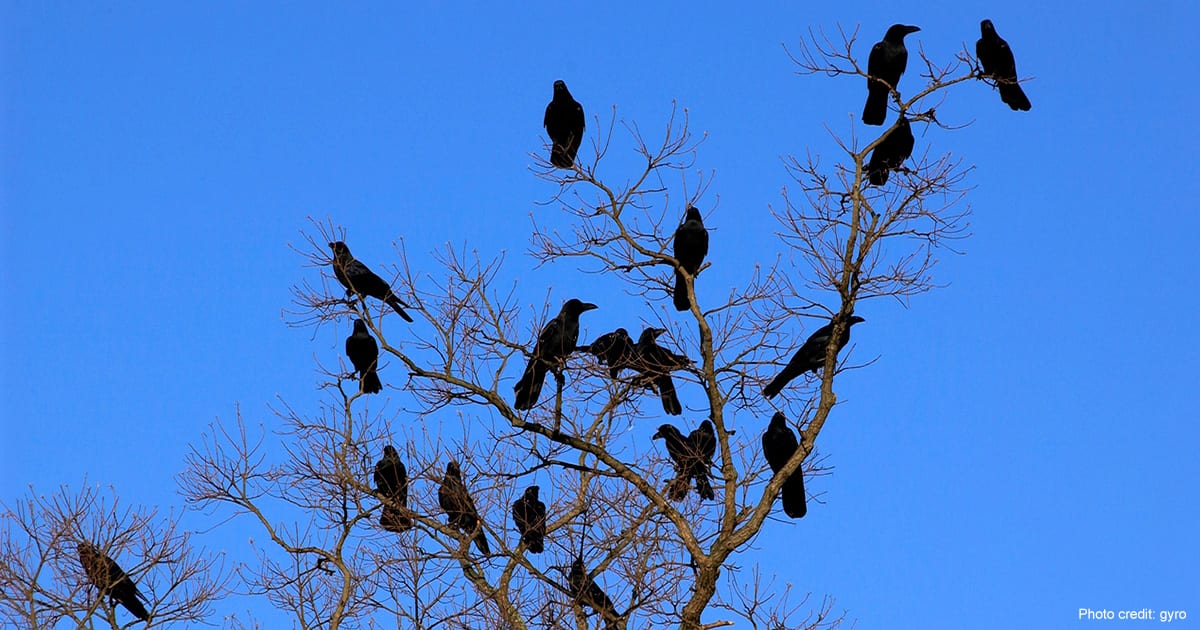 Everybody probably knows, or knows of, someone who apparently has a special affinity with animals. That person may be able to interact with an animal that everybody else is afraid to get near or they can quickly calm a frightened creature. In the human-animal bond world, for example, there are many specialist animal communicators. Linda Tellington-Jones, for example, has developed and trademarked the Tellington TTouch Training for equines and is clearly able to communicate with horses (and other animals) more deeply and effectively than the average person.

Recently, Lauren Markham brings us a story of a “crow whisperer” who is able to help people who have possibly antagonized a crow family. Crows can recognize specific human individuals as indicated in an earlier article on engaging crows while locked down during the pandemic.

The story began when crows suddenly began targeting Mona, a pet dog living with a couple in the city of Oakland, California. Whenever Mona was outside, crows would appear and would caw up such a racket that it was impossible to conduct a conversation. When Mona was taken on walks, crows would follow and would swoop down over the dog. It was a real-life version of Hitchcock’s movie, The Birds. Mona’s family had no idea why they were suddenly the target of crow enmity They could not escape the crows by going to other neighborhoods for walks, so they turned to that new fount of information – the internet – for help with crow conflict resolution. Several respondents suggested that they contact the local “crow whisperer” for help.

They reached out and the response was immediate – she would come round right away. When she arrived, she was dressed head to toe in black including a hoodie, gloves and mask. She explained that she did not want the crows to recognize her and start associating her with the targeted household!  She went into the back yard and, offering soothing words and silent messages of appeasement, she began looking around the back yard where the crow attacks first started. She quickly found an injured fledgling crow with a mangled and bloody wing. The group (a “murder”) of crows looked on silently as she talked quietly to the fledgling who staggered forward and walked straight into her outstretched hand.

She determined that the fledgling would, likely, not survive and so she advised the homeowners either to take the fledgling to the vet to be euthanized or simply provide it with a comfortable way to spend its last few hours. The second option was chosen, and the fledgling was placed in a box lined with soft towels and containing a small dish of water. The crow whisperer sent a few unspoken messages of apology and thanks and then slowly backed away, leaving the fledgling in its box.  A few hours later, the bird was gone, and the homeowners scattered some birdseed around worried that they might still be a crow target. However, when they stepped outside, the murder kept its distance, and the couple could once again sit on their deck or even in the garden without being bothered by the crows.

So how did the “crow whisperer” find her calling. She reported that she had been transfixed by animals since childhood, often finding them better companions than people. Then, years later, her husband came across a stranded fledgling crow and brought him home. She named the bird Carl, nursed him back to health and taught him to fly. Carl lived with them for over a year until, one day, he took off with a group of wild crows. He returned four days later missing some feathers and with a gash in his head! He had seemingly had a great time but was not yet ready to leave. Six months later, Carl took off for good, but he must have told the local crow population that the crow whisperer was an ally.

Her reputation spread and she now has a loyal following in Oakland, but she is wary of calling herself a psychic or animal communicator and remains skeptical about just what she can do.  Scientists are also skeptical of the stories of animal communicators and yet, she says she is sometimes able to know very clearly what her dog is thinking. Furthermore, she has a loyal group of believers and customers who swear by her ability to help with their pets.