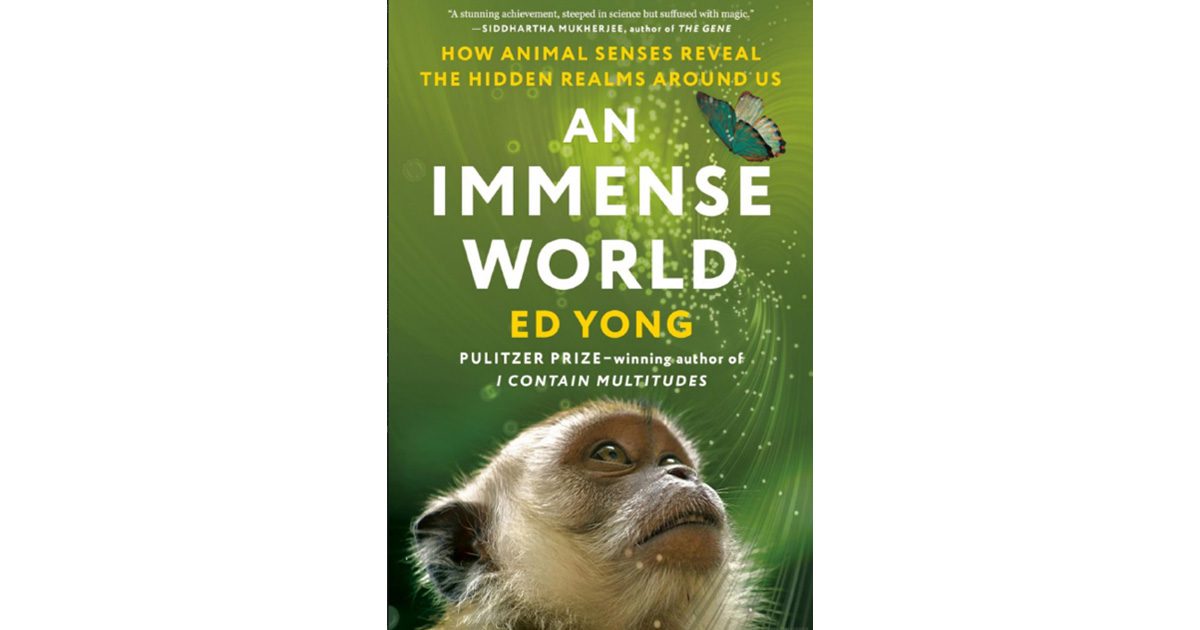 Posted at 14:09h By Steven Hansch and Leslie Barcus

Such an Array of Umwelts

Ed Yong’s 2022 instant classic, An Immense World:  How Animal Senses Reveal the Hidden Realms Around Us, delves into the senses of our animal cousins, including sight, sound, pain, smell, touch, vibrations, electric fields, and magnetic fields, and explains for the lay reader what evolutionary paths and junctures gave which senses to which creatures. Written as a very readable scientific exploration, it received numerous “Best-of-the-Year” reviews in the popular press and science journals.

Yong convincingly adds to our language the term Umwelt, referring to the distinctive sensory bubble, or individual environments, that are perceived by each of the Earth’s millions of species. “Like the occupants of [an] imaginary room, many creatures could be standing in the same physical space and have completely different Umwelten.”

Yong asserts at the outset that “Animals… have worth in themselves” and are not mere instruments for our learning new technologies. Quoting Henry Beston, “they are other nations, caught with ourselves in the net of life and time, fellow prisoners of the splendor and travail of earth.”

The author reviews specific examples one by one. For instance, ants evolved 140-168 million years back from specialized wasps and transitioned along their evolutionary path from being solitary to being very social. This sociality coincided with the ballooning of the sensory receptors for smelly chemicals, including pheromones, that ants use to recognize and communicate with one another.

A timber rattlesnake gathers smells with its tongue, which “turns the world into both map and menu, revealing the crisscrossing tracks of scurrying rodents and discerning the scents of different species.”

The author sprinkles scientific voyages of scientific discovery throughout. For example, he highlights the work of scientist Ken Catania who, for the last 30 years, has “investigated the senses of electric eels, mole-rats, crocodiles, tentacled snakes, emerald cockroach wasps, and humans… his attraction to weird creatures almost always pays off.”  As it turns out, humans have better eyesight than almost all other animals, except for birds of prey.

Giant squids who live deep in the dark ocean are alone in having giant eyes. Squid eyes have the singular value of seeing the flashes of bioluminescence given off by sperm whales, who hunt squid in deep water. “Giant squid are unique in being massive animals that need to see massive predators, and their particular need has led to a singular Umwelt. With the largest and most sensitive eyes, they scan one of the darkest environments on Earth for the faint sparkling outlines of charging whales.”

In addition to organs, sensations, evolutionary pathways, DNA, and scientists, Yong sometimes considers entire ecosystems. For instance, noting that many strong, springy plants transmit surface vibrational waves, he observes “between treehoppers, leafhoppers, cicadas, crickets, katydids and more, …around 200,000 species of insects communicate through surface vibrations. Their songs aren’t normally audible, so most people are unaware that they exist.”

Even animals that are the best at one specific type of sensing may use multiple senses to cross-check, complement, and provide backup, what Yong calls “uniting the senses.”  He adds, “the act of sensing creates an illusion that ironically makes it harder to appreciate how the senses work… our experiences of the world feel disconnected from the very sense organs that produce them, which makes it easy to believe that they are purely mental constructs… [but] you can’t simply imagine how a human mind would work in a bat’s body or in an octopus, because it wouldn’t work.”

His final chapter warns about how light, noise, and other polluting emanations from cities and human activity stun, overwhelm, and can even kill many creatures. Such pollutants have led to reductions in biodiversity. “A better understanding of the senses can show us how we’re defiling the natural world. It can also point to ways of saving it.”  Toward the end, Yong observes, “the majesty of nature is not restricted to canyons and mountains. It can be found in the wilds of perception – the sensory spaces that lie outside our Umwelt and within those of other animals. To perceive the world through other senses is to find splendor in familiarity and the sacred in the mundane. Wonders exist in a backyard garden, where bees take the measure of a flower’s electric fields, leafhoppers send vibrational melodies through the stems of plants, and birds behold the hidden palettes of rurples and grurples.” [Note: “rurple” and “grurple” refer to colors in the ultraviolet.]

Ed Yong is a Washington-DC-based science writer whose work has appeared in The New Yorker, National Geographic, Wired, The New York Times, Scientific American, and other publications. His 2016 best-seller, “I Contain Multitudes,” demystified the microbes around and in us. He edited the 2021 volume of the book series The Best American Science and Nature Writing.