Posted at 03:49h By Estelle Raballand 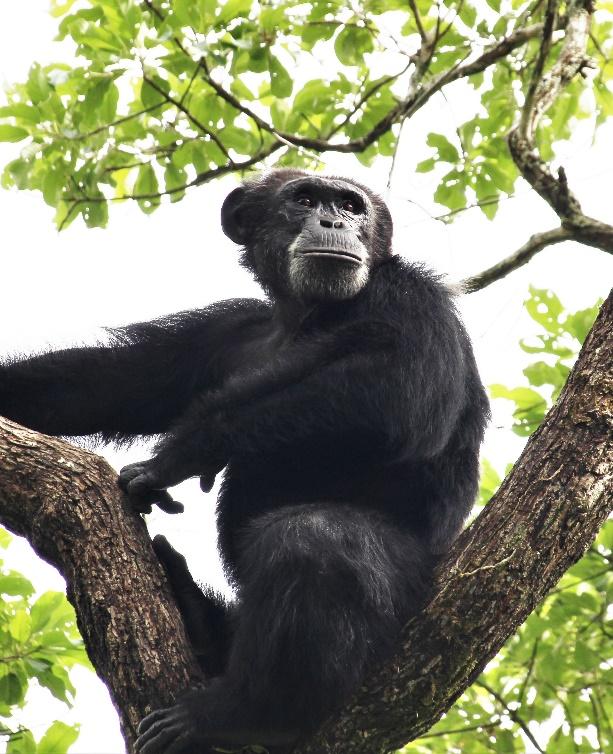 When Dr. Andrew Rowan, a great friend of the Chimpanzee Conservation Center (CCC) in Guinea, defender of animals, and Wellbeing International President, asked me to write about Coco for “Tales of Well Being” I was very flattered. It’s always pleasant to remember stories with happy endings and to spread the word about the plight of chimpanzees in West Africa. Although the CCC has rescued many chimpanzees over the years (there are currently 63 chimpanzees living at the CCC) and has successfully released 12 chimps back into the wild, the fate of wild chimpanzees is grim, especially for the West African subspecies. In 2016, the International Union for the Conservation of Nature (IUCN) listed this subspecies (Pan troglodytes verus) as “Critically Endangered” (up listing it from “Endangered”). Coco, an ambassador for his subspecies, has been through a series of life-changing experiences which are not particularly atypical for a West African chimpanzee.

Coco lost his family as a result of the illegal “pet” trade. This is one of the leading causes of the decline in chimpanzee numbers. While the poachers and traders who engage in this trade must be arrested and prosecuted, the confiscated orphans must have a safe place to go to or else they become “pets” languishing in cages or tethered at the end of chains. That was Coco’s fate. Orphaned at a young age he spent the first 14 years of his life chained behind a hotel in Conakry for the « amusement » of guests. He was attached by his neck to a tree, in the middle of a pile of garbage behind the pool. In 1995, Coco broke his chain and escaped onto the main road. There he was severely wounded by a soldier, who shot him five times. 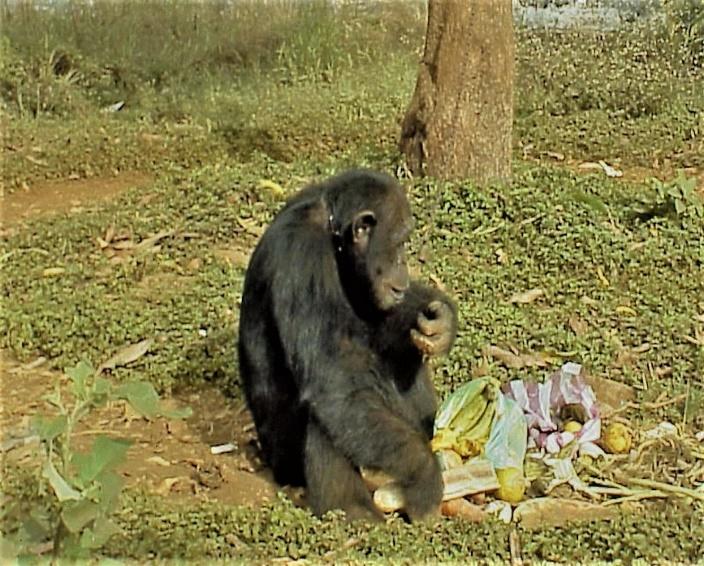 Coco behind a hotel in Conakry. The worn path around the tree is the extent of the chain attached to the tree trunk in the center. Photo: Andrew Rowan

At that time, I was living in Conakry, and caring for orphaned chimps at the request of the Guinean Government. I was summoned to help Coco and remove the bullets. He was scared and in pain and, although he did not know me, he decided to trust me (and vice versa). Neither of us had a better solution at the time! His legs remained completely paralyzed for over a year and it took months of treatment and re-education for him to recover some use of them. Despite his suffering, Coco was very patient. Given how dangerous adolescent chimps are known to be, Coco’s kindness is even more amazing. Unfortunately, he will remain disabled for life. His left leg is atrophied, and his right knee is stuck at a 90 ° angle (the kneecap was destroyed by a bullet).

Coco could only be transferred to the CCC in March 2000 after I became the CCC director in 1999. On arrival, he was almost 20 years old and already set in his ways! We did not succeed in integrating him with a group of other chimpanzees primarily because of his age and disability. Coco has lived with a few individuals over the years, but he prefers to be alone. He had access to his own small forest from 2002 to 2009. However, after multiple escapes (just because he could), and even after reinforcing his electrical fence to build an Alcatraz-like enclosure, we were forced to make the decision to keep him confined in an enclosure at all times.
During this period, Coco spent lots of time with staff and volunteers who provided the care and stimulation he was lacking because he could never be released into the wild or integrated with other adult chimps. Thus, we all have a special relationship with him. He loves to nibble ears, and in exchange, we nibble his nose gently.
In July 2011, Coco was attacked by bees. We recorded more than 1,000 stings. Confined in his enclosure, he had no way to escape the attack. He narrowly escaped death for the second time, but his thirst for life enabled him to survive. It took months of intensive care before we felt he was out of danger. I moved him beside my bedroom during this ordeal and he was the King of the Camp, for months! He eventually had to go back to his enclosure when he had recovered (he was throwing rocks at the cats as well as people he did not know or disliked).
It took years to raise the funds to build a fence strong enough to retain him. Eventually, Coco raised it alone, thanks to his touching story and loving personality. David Olsen, from the Olsen Animal Trust, fell in love with Coco during a visit and decided to sponsor the very costly escape-proof enclosure. After over six months of hard work and logistical nightmares (it takes several hours to travel from Faranah (a town 80 kilometers away) to the CCC site), it was finally done. Coco went out again on January 1, 2019. He was super excited and soooo happy to be out of his enclosure again. He is doing great – he climbs the few trees that are still alive in his fence. And he enjoys surveying his kingdom. Coco still likes being inside sometimes, and having playtime with volunteers and keepers, but at least now he has choice of where to go and has two buddies next door with whom he can interact. With more exercise, he has lost some weight and is looking very happy. At almost 40 years old, Coco is one of the “lucky” chimps, all things considered.
Most orphaned chimpanzees are killed during the capture. Those who survive are sold as pets into a life of slavery or die before they can reach a sanctuary. It is largely accepted that for every orphan chimp that reaches a sanctuary, ten others have died, including the mother and siblings. The 80% decline in the numbers of West African chimpanzees over the last 24 years is the outcome of the increasing threats for these sub-species. Sanctuaries and release centers, such as the CCC in Guinea, are even more crucial for their survival. We work every day to give chimpanzees like Coco, the best life possible and engage in constant outreach to educate the public about these wonderful creatures and the threats to their existence. Nevertheless, the outlook for their future is not good. The IUCN predicts further declines of 6% per annum if threats to the chimpanzees are not aggressively ameliorated.
Coco in his new fence: https://youtu.be/roKYDck1zs0
website: www,projectprimate.org
Facebook/twitter/Instagram: chimpanzeeconservationcenter
Print page