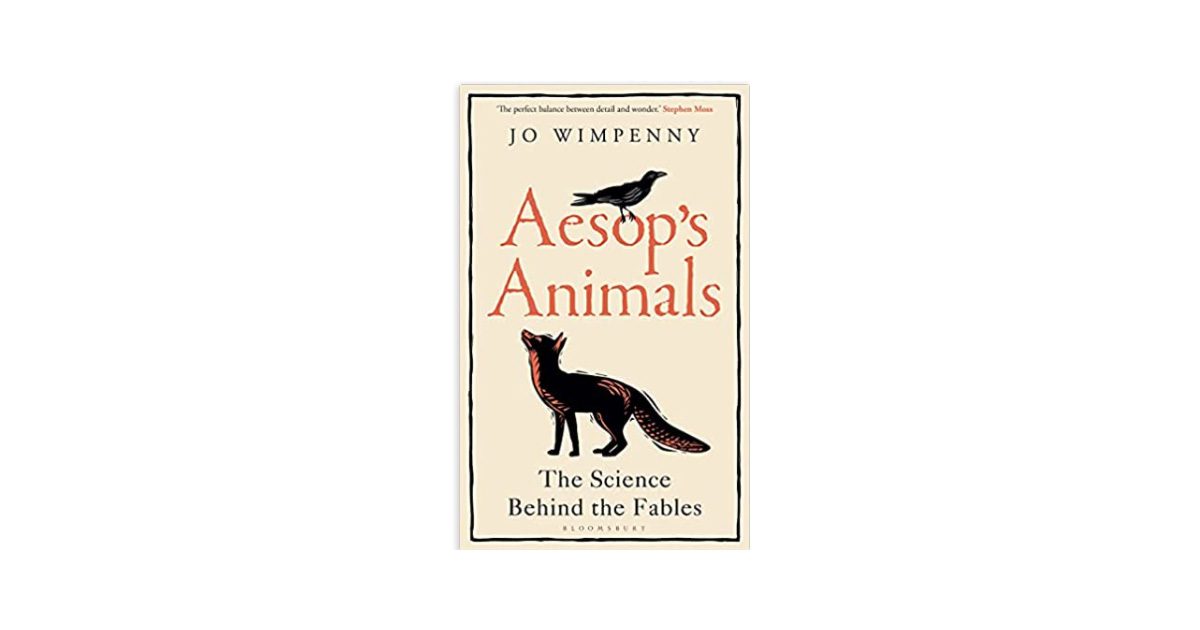 Oct 13, 2021 Aesop’s Animals: The Science behind the Fables By Jo Wimpenny

I was immediately attracted to this book because of its title. As a boy, I devoured many of Aesop’s fables and the various folk tales featuring wild animal heroes in Europe, Africa, and the Americas. I am not sure why anthropomorphized animal characters were so compelling and enticing.  Aesop was simply one of the first to rely on such characters. Today, children’s literature is rife with speaking and other animals that teach various lessons about appropriate behavior and the risks associated with selfishness or pride.

Wimpenny uses Aesop (perhaps a fictional character, perhaps not) and his fables as a vehicle to introduce the reader to a wide range of material featuring recent research insights into animal behavior. For example, the first chapter starts with the fable of the “Crow and the Pitcher,” in which a thirsty crow can access a small amount of water in a pitcher by filling the pitcher with stones and, thereby, raising the water level.  Dr. Wimpenny then discusses findings from recent research into the behavior of members of the Corvidae, the family to which crows (and rooks, ravens, jays, and magpies) belong. The findings are fascinating and open up an exciting new world of problem-solving and tool use by these birds that challenge the epithet, birdbrain, to describe stupidity.  Her doctoral thesis involved studies of the New Caledonian crow, a bird endemic to some small islands in the Pacific Ocean that has developed a particular adeptness in using tools.

Following the chapter exploring tool use and cognition in the Corvidae and other animals comes a chapter developed from the “Wolf in Sheep’s Clothing” fable. This chapter explores the issue of deception and whether or not animals might have a Theory of Mind in which they assume that another creature has thoughts about a particular situation. For example, if an animal intends to deceive another animal, it must have some concept that the target of the deception has specific thoughts and views about the world.

The third chapter starts with the story of the dog that observes its reflection in a pond and thinks that the reflection is another dog.  The chapter then continues to discuss research on mirror self-recognition to determine if animals are self-aware. Chimpanzees, for example, can use a mirror to examine themselves and will touch paint spots on their face or ear that they could not see without the mirror. But this test is still controversial forty years after it was first used to examine animal self-awareness.  Another chapter featuring the “Lion and the Shepherd” fable explores ideas about how altruistic behavior might have evolved.  (However, read this review for an example of the real-life survival of a solitary lioness.)  Another chapter uses a fable involving an Ass to discuss research in donkey and horse cognition and welfare.  Other fables lead into discussions of imitation versus situational learning in animals and whether or not animals can plan for the future.

The author, who progressed through university to earn a DPhil in animal behavior from Oxford University, is now a science writer. We are all the better for that career choice.  She has the knack for bringing interesting research to life with anecdotes without obscuring the more significant challenges of determining just what animals can do and what they may be thinking.  She also has an excellent ear to identify a telling quip. I particularly like the quote from Craig Packer, a world authority on lions, “Lions are supremely adept at doing nothing. To the list of inert noble gases, including krypton, argon, and neon, we would add lion.”  The chapters can be read out of order, so please feel free to dip into Aesop’s Animals wherever the heart takes one!

Dr. Jo Wimpenny is a zoologist and writer with a research background in animal behavior and the history of science. She studied Zoology at the University of Bristol and then studied problem-solving in crows for her DPhil at Oxford University. After postdoctoral research on the history of ornithology at Sheffield, she co-authored the book “Ten Thousand Birds: Ornithology Since Darwin” with Tim Birkhead and Bob Montgomerie. The book won the 2015 PROSE award for History of Science, Medicine, and Technology.