Save the Dogs and other Animals

Save the Dogs and other Animals is Romania’s leading animal welfare organization. The organization was founded in 2002 to promote a culture in Romania where people recognize the importance of animal welfare in their communities and where the inhumane killing of stray dogs stops. Save the Dogs and other Animals provides free sterilization and treatment for animals living in the streets and living as free-roaming members of their communities. The organization recently rescued 30 dogs from a war-damaged shelter in Ukraine, provides supplies and other support for refugees crossing from Ukraine to Romania, sends pet food to animal shelters in Ukraine, and provides supplies for refugees at Bucharest airport. When appropriate, dogs and cats are rehomed through an international adoption program. The facilities in Cernavoda, Romania, typically have around 120 dogs, 40 cats, 60 donkeys, and 20 horses.

In its Ukraine response, they’ve sent more than 260 tons of pet food to shelters and volunteers who feed street dogs and cats, and continue to send more as funds to purchase more food is received.  They’ve helped more than 400 refugees’ pets and given away more than 300 pet carriers and hundreds of other pet supplies. They rescued 30 dogs from a Ukrainian shelter damaged by a Russian attack. 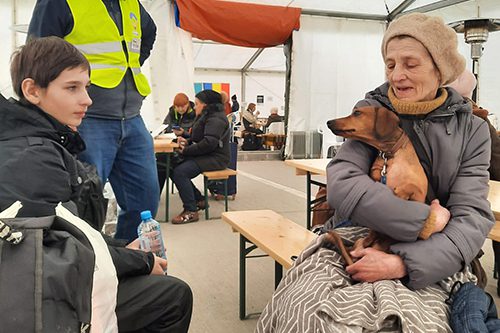 A family in shock, comprising a grandmother, a mother, and her teenage son, arrived at Romania’s border point at Isaccea, chilled to the bone and accompanied by their dachshund named Odessa.

They had escaped from the besieged city of Mykolaiv. Their home has been razed to the ground. They are safe, but they have nothing left. After arriving at the border with Romania, they were given food and shelter at the relief aid center installed there by the Romanian authorities. The Save the Dogs and other Animals team provided them with a dog coat for Odessa, food, and an animal carrier. It was an emotional moment for the family to witness everyone’s solidarity with their plight and the compassion shown for their pet.

Many people have chosen to flee with their animals before bomb attacks prevent them from leaving Ukraine. This scenario was the case for Helena, a young girl who came to our relief station to ask us to help her and her dog. Helena was the only person to escape Kherson. Her family is still stranded, now prevented from leaving the city because of the fighting that is taking place.

Helena is traveling solo with her dog Kuzma, the only member of the family still with her. Helena needed a pet carrier to carry on her journey to a safe haven, which we were able to provide along with some food supplies and a dog blanket. It is incredible that for animals like Kuzma, their survival can depend on a simple thing like a pet carrier, which is essential so that they and their owners can continue their onward journey by plane, bus, or train. This accessory is such an everyday item, but it can make all the difference in the world for those who have lost everything.

Meet Gregg Tully, Country (Romania) Director of Save The Dogs

“Thank you so much for helping animals during this difficult time. I did not find help for the animals to evacuate, so we stayed at shelter. Your help is a salvation for us”

Updates from Save the Dogs

I’m writing to share an update with you about Save the Dogs’ work for animals affected by the war in Ukraine. We just sent 20 tons of dog and cat food to Odessa. Right now it’s being distributed to animal shelters and volunteers who take care of the countless animals who were abandoned when their people fled Mykolaiv, the Odessa area, and Kharkiv.

We’ve now sent 200 tons of animal food to Ukraine. Additionally, we’re continuing to provide supplies to Ukrainian refugees at the border, as well as at the airport and the main train station in Bucharest.

Sadly, it’s still not enough – people in Ukraine are already asking me for more food, and refugees continue to cross the border every day. Although public interest and donations for Ukraine are waning, we’re determined to continue helping the animal victims of the war as long as needed.

The devastation of war really hit me last week. A driver from Kharkiv had picked up a truckload of food at our shelter a few weeks ago, and when we called to ask if he could make another delivery, we learned he was killed in a Russian attack near Mykolaiv. We never ask anyone to go into dangerous situations, but drivers want to deliver supplies to help their country and earn urgently needed money. (Many people in Ukraine haven’t worked since the war began and rely on drivers and others who are still employed.) Furthermore, almost every day people in Mykolaiv and Kharkiv tell me they’re desperate for food for starving animals. Still, it’s hard to come to terms with.

On the brighter side, one of the best parts of this job is getting photos and videos of street cats and dogs eagerly eating the food we send. I’m inspired by the volunteers’ selflessness, sharing the food with so many others. For example Tatiana in Mykolaiv told me, “Now there is no way to go to the villages that have suffered from Russian aggression due to the fact that they are under constant shelling. We will be happy to bring pet food to people who take care of abandoned animals and animals from destroyed villages, and if possible we will take the next batch directly to the villages.“