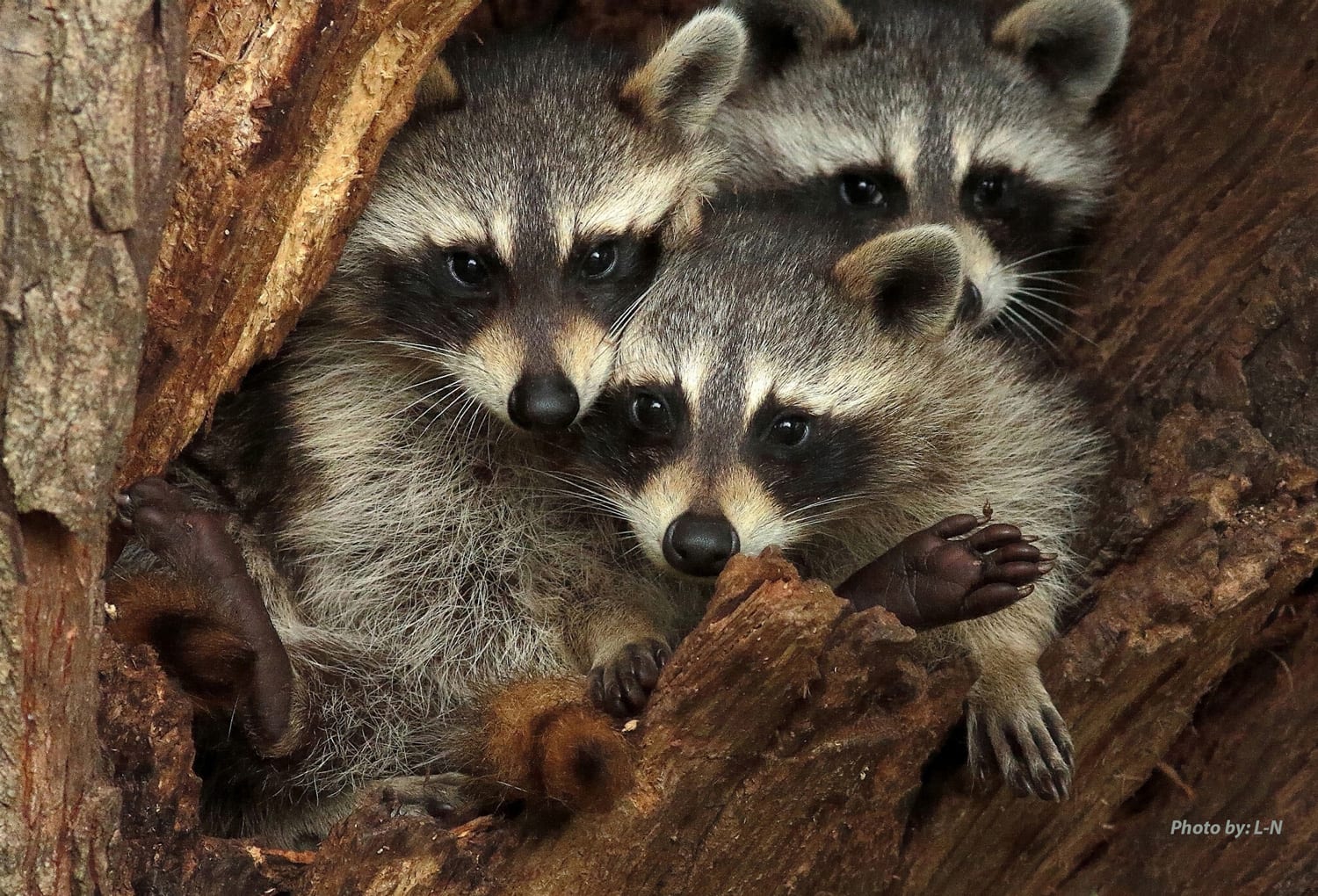 Posted at 23:58h By Kathleen Rowan

Once upon a time, there was a family of raccoons who lived in a suburban neighborhood. Their home was a beautiful tree (perhaps a hickory tree) with a large hole about halfway up and a mysteriously built wind breaker next to the entrance. It made for a cozy home for a mom and three frisky teenager kits–one sister (the oldest and often called “bossy boots” by her brothers) and two brothers Rockford and Phil. Rockford was the largest who often took up as much as 45% of the children’s space in the home – more than his 33% share as Sister repeatedly pointed out. The youngest was Phil, the philosopher among the three kits.

This night in mid-December was cold with blustery winds. Mom was out looking for food but the three kits were safe in the den. They were also warm and toasty (Rockford had much to do about that since Sister could barely move after Rockford said he needed to stretch out due to a leg cramp). Mom had been gone for a long time and the three were very anxious. As the hours stretched on, Phil, curled up in a tight ball because there was no more room, posed a question, “What is well-being?” Sister looked over Rockford’s large belly into Phil’s eyes and asked, “What prompted that question?”  Rockford again rolled over causing both Sister and Phil to adjust their positions and flatly stated that a full belly was high on his well-being list. Sister offered her opinion which included a nice, orderly neighborhood with enough space for all. Phil offered no comment.

As the time wore on, Rockford stated that he liked where he lived. The people did not bother them and the dogs were all inside at night when he was outside foraging. Furthermore, the people who lived on the next street over often had a great selection of left-over take-out food in their unsecured garbage can. He also noted that the people had recently begun to look like the raccoon family since they had all taken to wearing masks!  Sister liked the open spaces of the neighborhood and their freedom to explore and make friends with other creatures. Phil again offered no comment.

As the conversation waned again, the three kits heard a noise outside the den. The anxiousness that was instilled in the kits to be wary of intruders seemed to last forever. It was broken by their mother’s face in the entrance way followed by a feast – a large, whole ‘toppings loaded’ pizza(!) – to be shared among the family. Rockford noted that left-over pizza was his very favorite food. After a wonderful dinner and a high-spirited tussle, mom raised her voice and said it was time for bed. Although there were some grumblings, the three kits retired to the children’s space and Sister estimated that Rockford now occupied at least 48% of the space.

As the first glimmers of dawn showed in the sky, the little home became very quiet and peaceful. All was well with the family this morning. As Sister began to drift off to sleep, she heard Phil murmur, this is my WELL-BEING!

May there be WELL-BEING for people, animals and the environment around the world this holiday season!

From all of us at WellBeing International

[Raccoons typically mate in the second half of winter and the kits (typical litter is 2 to 5 kits) are born in early summer. They are raised by the female and then disperse in late fall although they may stay in the home den during the first winter in colder climates.]