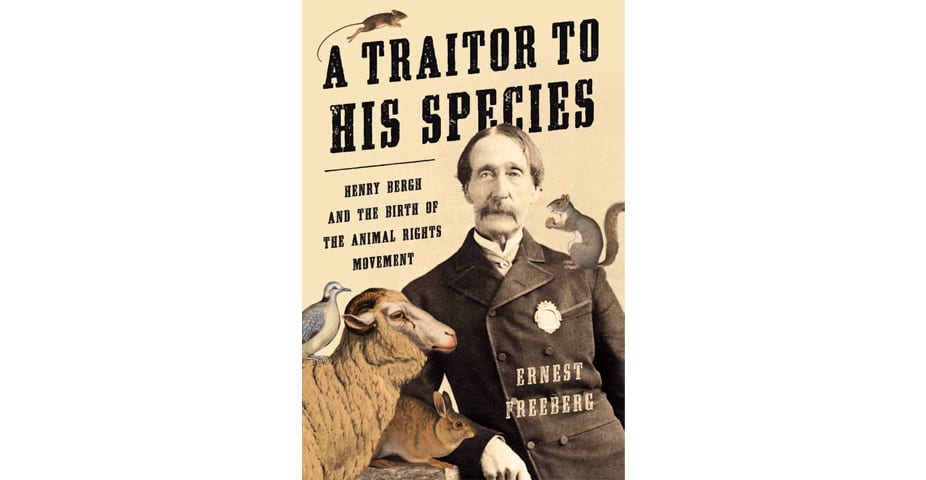 In this, the first and only modern full-length biography of Henry Bergh, founder of the American Society for the Prevention of Cruelty to Animals, historian Ernest Freeberg offers a thorough, balanced, and human portrait of his subject. Freeberg’s lively treatment puts Bergh’s courage, resilience and tenacity in clear relief without glossing over the complexity and contradictions that made Bergh something of an enigma in his time. Taking a fresh look at Bergh’s fabled battles — against dogfighting kingpins, seafood merchants, circus operators, pigeon shooters, physiologists, canal transport companies, railroad corporations, streetcar magnates, meat barons and others — Freeberg makes a persuasive case for Bergh as the most dynamic figure among the first-generation leaders of organized animal protection. There was a reason that some journalists referenced the broader cause as “Bergh’s War.”

Freeberg’s gift for narrative makes his discussions of the many and diverse contexts in which Bergh’s work unfolded especially satisfying, and he paints a vivid portrait of nineteenth century life in urbanizing, industrializing New York. Taking better advantage than any prior Bergh scholar of the digitization of nineteenth century newspapers that loved to cover “the Great Meddler,” Freeberg provides new details concerning a number of Bergh’s most interesting fights — against the dog fighting kingpin Kit Burns, against P.T. Barnum, against genteel pigeon shooters, and against the turtle soup tradesmen, to cite a few examples.  He also does a great service in describing the powerful lesson of the 1872 horse epizootic, that human dependence upon animals at that time was such that any loss of animal power was crippling to human society and economy.

Freeberg doesn’t directly say so, but his assessment of Bergh is close to the one that I have developed in my own scholarship, that he was a leader more in action than in thought. That said, Freeberg’s work is a good reminder that we should not underestimate Bergh’s intelligence. He quickly learned the value of creating a sensation, harnessing his interest in the theater to the larger stage of urban life. The 1866 and 1867 laws he championed were unusual for their time, and he knew something about how to get them enacted into law. He was also clear about his fundamental purpose, to transform cruelty to animals from a regrettable fact of life into a moral problem of greater social significance. And he succeeded.

Freeberg develops new ground and insights in a few areas.  One of the most important is his attempt to inform the challenge that prior historians had in explaining Bergh’s rapid and intense conversion to a great moral reform. Freeberg suggests that the Gilded Age produced many people like him, and in this respect, moves us away from undue focus on Bergh’s eccentricity or zeal to a fundamental appreciation that he came to the cause in honesty and that he pursued it with the highest intent and purpose.

In the end, A Traitor to His Species offers a hardy and convincing assessment of Bergh’s strengths and forceful personality, as well as his nose for publicity and thirst for progress. He was a pioneering figure of a movement that continues to make the kinds of moral and practical claims upon the world that he did in his time.  This book allows us to know him much better, as a flesh-and-blood apostle for a new cause, one that sought to push the boundaries of human compassion beyond the species barrier.