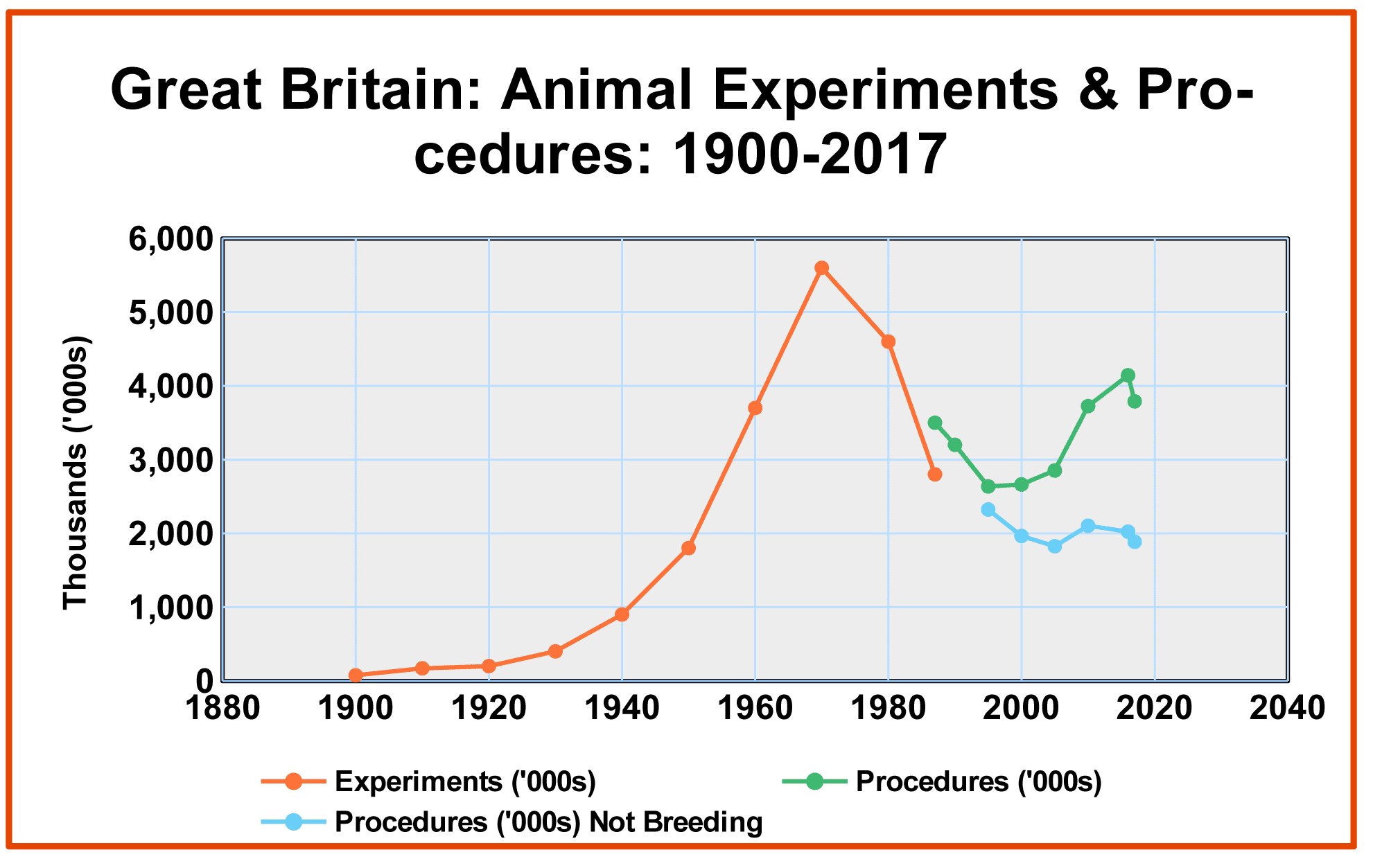 May 31, 2019 A Quiet Revolution Replacing the Use of Animals in Research

Posted at 07:05h By Andrew Rowan, DPhil
On 16 May (2019), the Sanger Institute outside Cambridge in the UK announced it would be closing its laboratory animal facility in the next few years. It came to this decision “following a rigorous review” of its scientific strategy and after consulting with the Wellcome Trust, one of the major funders of biomedical research in the world today and a very generous supporter of programs at the Sanger Institute. This is a momentous decision, but it is not particularly surprising (except for the timing – earlier than expected) to those of us who have been following the animal research issue over the past thirty years.
As the chart above shows, the use of laboratory animals in Great Britain peaked in 1975/1976 at around 5.5 million experiments a year (one experiment/procedure is approximately equal to one animal used). The use of animals in experiments/procedures declined rapidly from 1975 to around 2000 and then levelled off at around 2 million procedures (“animals”) a year (see blue line above).
In 1987, the authorities in Britain switched from counting “experiments” to counting “procedures.” The main difference was that “procedures” now included breeding of animals for experimentation and the number of laboratory animals reported annually jumped by about 20%. However, in the mid-1990s, new genetic techniques allowed researchers to create “designer” mice with specific genetic properties and the creation of genetically modified mice took off. But the last year or two has seen a significant decline in the production of these “designer” mice, in part because of the development of new non-animal technologies and also in part because the “designer” mouse revolution has mostly not produced the breakthrough new therapies that were predicted. In fact, the last two Directors of the National Institutes of Health have both noted the lack of success of the new mouse models developed using genetic engineering techniques and have called for the development of new approaches based mainly on the culture of human cells and organs (made possible in part by the development of new techniques in human stem cell culture).
The Sanger Institute (a key player in the sequencing of the Human Genome at the end of the 20th Century) is now positioning itself to continue to be a leader in biomedical research by embracing the very promising new non-animal technologies (such as stem cell techniques, human organs on a chip, minibrain techniques and, in toxicology, new high through-put cell culture approaches). We are beginning to see the prediction by Nobel Prize Winner Sir Peter Medawar come to fruition. In 1969 (fifty years ago), he stated that, “… research on animals will provide us with the knowledge that will make it possible for us, one day, to dispense with the use of them [in the laboratory] altogether.” (The Hope of Progress, 1972, Methuen.) While people may argue that the Sanger Institute is jumping the gun on Medawar’s prediction, I argue that they have the timing just right!
In 2017, we see the first tentative sign in the numbers reported by the UK Home Office that animal use in experiments is starting to go down again. I expect this trend to continue and, perhaps by 2050, most of laboratory animal use will have been replaced by non-animal technologies affirming Medawar’s prediction.
Print page