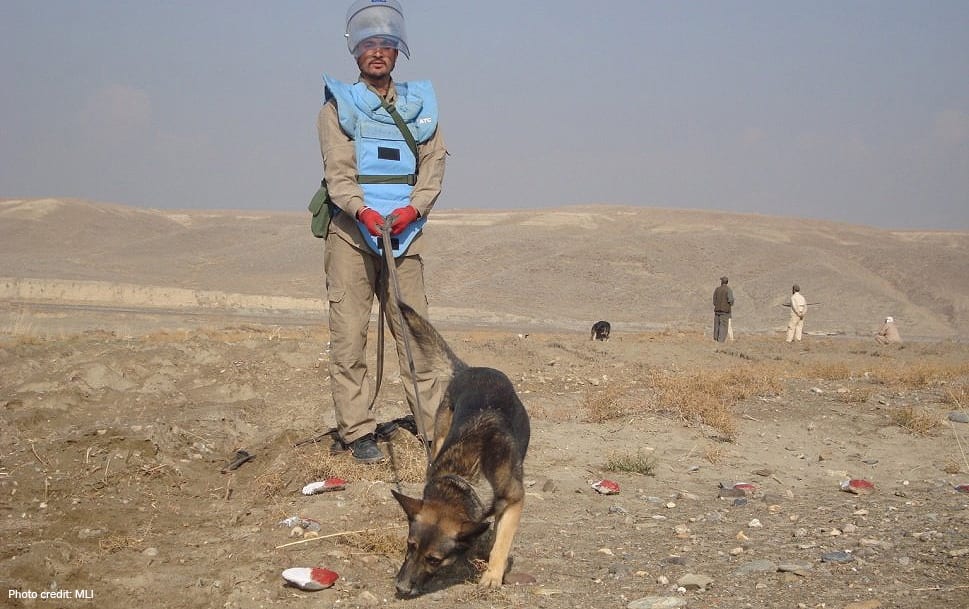 The human-dog relationship is extraordinarily rich and rewarding, as evidenced by Lord Byron’s famous epitaph for his dog Boatswain (pronounced Bosun) in 1808:-

Near this Spot Are deposited the Remains of one Who possessed Beauty without Vanity, Strength without Insolence, Courage without Ferocity, and all the virtues of Man without his vices.
This praise, which would be unmeaning Flattery If inscribed over Human Ashes, is but just tribute to the Memory of Boatswain, a Dog ….
Some of the strongest of these human-dog bonds are found among the human-dog pairs entrusted with providing security for humans and animals. Jaromir Jasipovic and Brenda, a human-dog demining team exemplified this bond, winning an award as the best demining team at the Marshall Legacy Institute (MLI) gala in Washington.
Jaro arrived in Washington with a suitcase full of Brenda’s favorite food (and no extra clothes) because he feared he could not find the food in the United States. The bond was so strong that the Serbo-Croatian interpreter told the head of the MLI that she wished her “husband had as many loving things to say about me that Jaro had to say about Brenda!”
In 1997, on the 50 th Anniversary of the Marshall Plan, the MLI was founded by a group of U.S. military retirees who wanted to honor the memory of General Marshall and extend his vision and legacy by addressing the insidious threat of landmines, the deadly relics of armed conflicts, that are currently responsible for the death of one human every 40 minutes (and about 60 animals) around the world.
The founders of the MLI determined that an essential tool to find and remove landmines was the human-dog team. Dogs have very sensitive smell machinery and are capable of detecting “off-gassed” molecules of an explosive in the air with great sensitivity. Working together with a trained human-deminer, the dogs can search far more territory of landmines with greater effectiveness than either humans alone or by using mechanical methods. And despite the spending of hundreds of millions of dollars on research and development, we still have not been able to produce a machine that can beat a trained dog at explosives detection. Although their work is dangerous, none of these highly trained dogs donated by MLI have been injured or killed while at work in the field. So MLI continues to pay for the training of dogs to be sent to mine-affected countries where they spend five to eight years working very closely with a human handler. Inevitably, a very strong bond develops between the human and the dog. 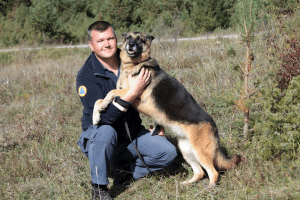 In 2014, another team from Bosnia, Alden Cesko and Betsy his mine detection dog, won the demining team award at the MLI “Clearing the Path” gala. The head of the mine detection program from the Federation of Bosnia and Herzegovina Civil Protection noted that the human handler is a key element in the team’s success, but he also said, “They love each other. I’m witnessing that every day.” Betsy got her name from Elizabeth Parkinson, the mother, and grandmother of a Connecticut family that has become a major promoter of CHAMPS (MLI’s Children Against Mines Program, an educational outreach that engages students in the global effort to rid the world of landmines). Betsy Parkinson and her family have persuaded 28 schools in southern Connecticut to join CHAMPS and have been responsible for raising funds to send more than 14 dogs to mine-affected countries. The CHAMPS program was launched initially and promoted widely by Diana Enzi in Wyoming where her husband is the senior Senator.
Today, MLI has sent nearly 250 mine-detection dogs to eleven countries that have been involved in clearing almost 50 million square meters of land (over 12,000 acres) of landmines. This is a very successful record of achievement but, in this story, we want to draw attention to its foundational element – the extraordinary relationship between humans and dogs that have fueled this success.
Print page